A solar cell you can put in the wash

Scientists from RIKEN and the University of Tokyo have developed a new type of ultra-thin photovoltaic device, coated on both sides with stretchable and waterproof films, which can continue to provide electricity from sunlight even after being soaked in water or being stretched and compressed. The work, published in Nature Energy, could open the way to wearable solar cells, which will provide power to devices such as health monitors incorporated into clothing.

One of the requirements of the Internet of Things—referring to a world where devices of all sorts are connected to the Internet—is the development of power sources for a host of devices, including devices that can be worn on the body. According to Takao Someya, the leader of the research group, these could include sensors that record heartbeats and body temperature, for example, providing early warning of medical problems. In the past, attempts have been made to create photovoltaics that could be incorporated into textiles, but typically they lacked at least one of the important properties—long-term stability in both air and water, energy efficiency, and robustness including resistance to deformation—that are key to successful devices.

For the present work, the members of the research group developed extremely thin and flexible organic photovoltaic cells, based on a material called PNTz4T, which they had developed in earlier work. They deposited the device in an inverse architecture, which they had previously developed, onto a 1-um-thick parylene film. The ultra-thin device was then placed onto acrylic-based elastomer and the top side of the device was coated with an identical elastomer, giving it a coating on both sides to prevent water infiltration.. The elastomer, while allowing light to enter, prevented water and air from leaking into the cells, making them more long-lasting than previous experiments.

The researchers then subjected the device to a variety of tests, finding first that it had a strong energy efficiency of 7.9 percent, producing a current of 7.86 milliwatts per square centimeter, as the current density was 13.8 milliamperes per square centimeter at 0.57 volts, based on a simulated sunlight of 100 milliwatts per square centimeter. To test its resistance to water, they soaked it in water for two hours, and found that the efficiency decreased by just 5.4 percent. And to test the durability, they subjected it to compression, and found that after compressing by nearly half for twenty cycles while placing drops of water on it, it still had 80 percent of the original efficiency.

According to Kenjiro Fukuda of the RIKEN Center for Emergent Matter Science, “We were very gratified to find that our device has great environmental stability while simultaneously having a good efficiency and mechanical robustness. We very much hope that these washable, lightweight and stretchable organic photovoltaics will open a new avenue for use as a long-term power source system for wearable sensors and other devices.” 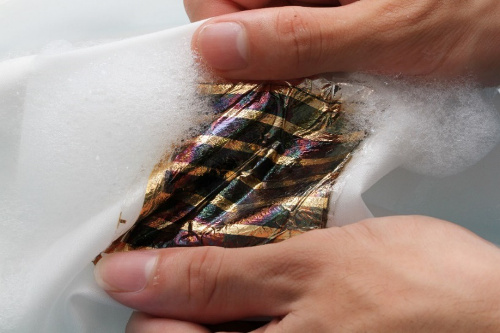 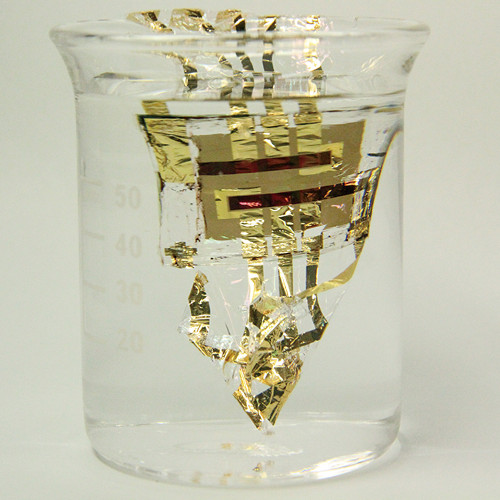 The OPVs are submerged in deionised water.