Induced pluripotent stem cells—stem cell-like cells that have been reprogrammed from normal body cells—are a promising avenue of regenerative medicine, and are currently being tested in several clinical studies. However, there are concerns that the mutations that arise in these cells during their generation could potentially cause problems in transplant patients, in particular malignancies. Consequently, researchers are keen to understand the nature of the mutations that arise in these cells.

Now, in research published in Cell Reports, a team from the RIKEN Preventive Medicine and Diagnosis Innovation Program (PMI) and other institutes has some potentially comforting news. By performing genomic analysis on both mouse and human iPS cells, they found that unlike disease-causing single nucleotide polymorphisms, the mutations found in iPS cells tend to be concentrated into non-transcribed areas of the genome between genes. They also showed that the new mutations that arise in iPS cells are likely caused by oxidative stress, and that this seems to explain why they are concentrated in certain regions.

The specific areas where the new mutations tend to be found—called “lamina-associated domains”—are located on the outer edge of the cell’s nucleus, in the membrane that separates the nucleus from the cytoplasm. These areas are characterized by condensed chromatin, and are sensitive to the oxidative damage released from mitochondria. It is known that mutations tend to occur differently in different parts of the genome, depending on a number of factors including the source of the damage, the accessibility of DNA repair mechanisms and the “chromatin status,” which refers to how tightly the DNA is wrapped.

According to Yasuhiro Murakawa of the RIKEN Preventive Medicine and Diagnosis Innovation Program and the RIKEN Center for Life Science Technologies (CLST), who led the group, “In this study we found that though there are many mutations that arise during reprogramming, many of them are in transcriptionally repressed lamina-associated domains, and it is tempting to speculate that this means that they will not lead to adverse effects.” The researchers also noted that most of the non-synonymous—meaning that the mutation leads to an actual change in a protein—mutations were not those found in a catalog of cancer-related mutations, so were essentially new mutations that still need to be investigated.

Murakawa says, “This study has given us insights into the broad mutational landscape of iPS cells, and it will give us a framework for looking at variations in iPS genomes. This will help us in the quest to develop new therapies.” This work was done in collaboration with CLST, the National Institutes for Quantum and Radiological Science and Technology, and Osaka University. 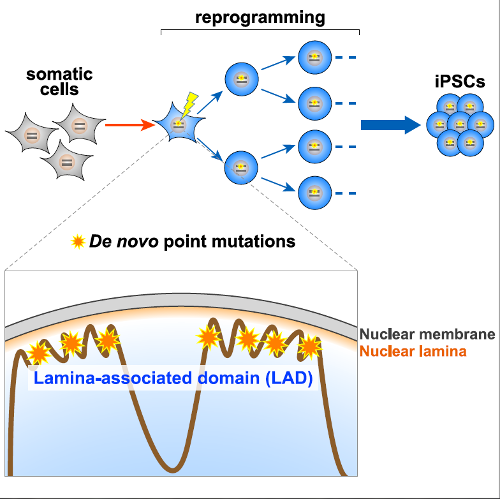 Schematic of the findings

Most of the new mutations that arise during reprogramming are concentrated in transcriptionally repressed lamina-associated domains, which are regions of condensed chromatin bound by the nuclear lamina at the nuclear periphery.