Blocking key pathways is a way to defeat cancer cells

Scientists from the RIKEN Center for Integrative Medical Sciences in Japan and international collaborators have found that in humanized mice, a cocktail of drugs blocking certain key pathways is effective in eliminating acute myeloid leukemia (AML), a disease which is estimated to kill more than 250,000 people a year around the world.

The most difficult problem with AML is disease relapse, which occurs in a majority of patients being treated with chemotherapy. During the last decade or so, it has become recognized that cells called leukemia stem cells (LSCs) can cause relapse because they survive the onslaught of chemotherapy drugs and proliferate.

The group began to investigate compounds that could target these stem cells and in 2013 announced that they had discovered one―now known as RK-20449. This compound targets a certain class of tyrosine kinases―receptors that play an important role in signaling for cells in the bone marrow and blood, such as the ones that cause leukemia.

Now, in research published in Science Translational Medicine―a journal dedicated to the conversion of scientific discoveries into actual therapies―the group has shown that targeting two important pathways simultaneously is a promising route for eliminating cancer.

One of the difficulties of developing targeted therapies against AML and other tumors is that the cancers can be very genetically diverse―cells in different patients and even cells in a single patient may harbor different mutations, making it hard to determine which are truly important for tumor growth or survival. Many of the mutations found in cancerous AML cells, for example, are also found in the cells of people―especially aged people―without leukemia.

To elucidate which mutations are truly relevant, the group took cells from AML patients, in various stages of the disease, and transplanted them into immune-deficient mice engineered to accept human cells, and then examined how the cells behaved―in either a normal or leukemic way―in organs such as bone marrow or spleen. “What we did,” says Fumihiko Ishikawa, the leader of the group, “is to connect the genomic information and biological functions of the cells.”

Using this method, they were able to discover that a mutation in a gene coding FLT3, an important tyrosine kinase, is critical for transforming normal bone marrow cells into AML cells and that another gene, BCL2, functions to promote therapeutic resistance in FLT3-mutated AML. This mutation, called FLT3-ITD, is one of the most common mutations found in AML patients. The group showed that by using RK-20449 to block abnormal signaling caused by FLT3-ITD, AML cells with multiple mutations could be effectively eliminated. In addition, by simultaneously targeting BCL-2 with a second drug called venetoclax (ABT-199), they could achieve the complete elimination of AML in the transplanted mice in most of the AML cases tested.

“This shows,” says Fumihiko Ishikawa, the leader of the group, “that determining which of the mutations in a diverse landscape are critical in leukemia onset and which of the pathways are critical for therapeutic resistance in leukemia, and simultaneously targeting those pathways is an encouraging way to treat difficult cancers such as AML.” 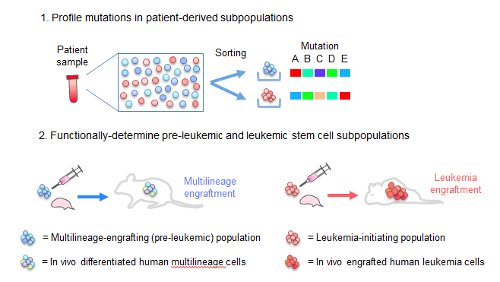 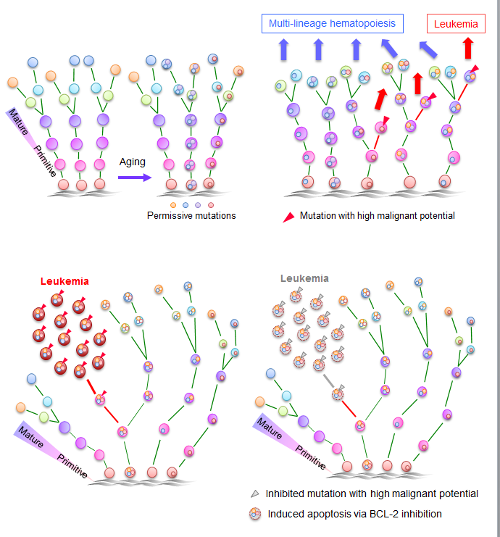