A collaboration of scientists from five of the world’s most advanced x-ray sources in Europe, Japan and the US, has succeeded in verifying a basic prediction of the quantum-mechanical behavior of resonant systems. In the study published in Nature Physics, they were able to carefully follow, one x-ray at a time, the decay of nuclei in a perfect crystal after excitation with a flash of x-rays from the world’s strongest pulsed source, the SACLA x-ray free electron laser in Harima, Japan. They observed a dramatic reduction of the time taken to emit the first x-ray as the number of x-rays increased. This behavior is in good agreement with one limit of a superradiant system, as predicted by Robert H. Dicke in 1954.

Dicke predicted that, in the same way that a large collection of bells will act differently from a single bell that is tapped, a group of atoms will emit light in response to excitation at a different rate—faster—than a single atom. He predicted a "superradiant" state, where, when large numbers of photons or quanta are put into a system with many atoms, the decay becomes much faster than for a single atom in isolation. Taking the analogy of bells, he was suggesting that if you have a large number of bells that you excite together, they can ring loudly, but the sound dies out much more quickly than the gentle fading of a single bell. His approach included quantum effects, predicting that the fastest decay occurred when the number of quanta was half the number of atoms.

The concept of superradiance has since been verified, and, indeed, is a touchstone in the field of quantum optics. However, Dicke also predicted that a very strong change in decay rate would occur even when the number of quanta in the system was much less than the number of atoms in the system. This is what was investigated in the recent experiments at SACLA and the European Synchrotron Radiation Facility (ESRF) in France.

The new work replaced the low-energy quanta envisioned by Dicke with high-energy x-rays, allowing the researchers to follow the decay of the system one quantum—meaning one x-ray—at a time. However, getting strong pulses of x-rays is much harder than for low energy light, and required using the most modern sources, x-ray free electron lasers. These sources have only become available recently, and of the few operating in the world, only one, SACLA, at the RIKEN SPring-8 Center in Japan, achieves the required high energy. Using this source an international team of researchers from the ESRF in France, SPring-8 in Japan, DESY in Germany, the APS in the USA, and the Kurchatov Institute in Russia, were able to precisely follow the decay for up to 68 x-ray photons. They observed the accelerated emission of the first photon to be in excellent agreement with Dicke's prediction. The single-photon decay under the same experimental conditions was studied at the ESRF.

According to Alfred Baron of the RIKEN SPring-8 Center, “Through this work, we were able to demonstrate Dicke’s work to be correct, and were also able to offer an alternative picture of the decay properties, based on a statistical approach. This will be valuable for understanding future work.” 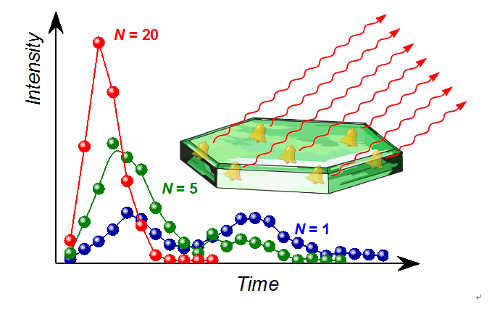 The figure shows photon emissions from57Fe atoms. The chart shows that as the number of atoms increases from 1 to 5 to 20, the time until the first emission increases, while the energy of the photons increases. 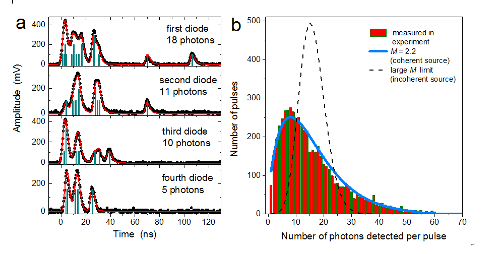 Measuring the multi-photon emission after a single pulse of XFEL

a, Scope traces from the avalanche photo diode (APD) detectors after one pulse of 44 photons and the fits used to analyse the distribution. b, The distribution of multi-photon events measured in the APD detectors, as compared with a model incorporating a coherent source with few modes (M = 2.2) and an incoherent source (large M limit). 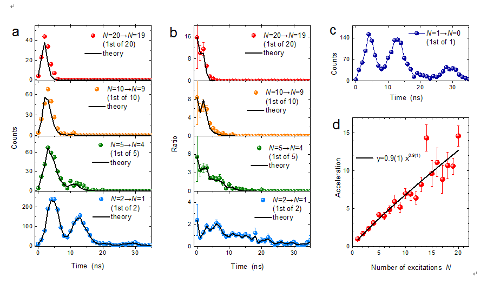 Acceleration of the initial decay rate

The increase of the initial decay rate for the transitions from N to N-1 excited states revealed (a) by the accelerated decay of the first out of N detected photon, PN1( t) (b) by the ratios PN1( t)/ P11( t) of these data to the single-photon decay P11( t) (shown in (c)), and (d) by the estimated acceleration rates ( PN1/ P11)|t→0. The solid lines in (a, b) are the calculations based on the statistical approach. The solid line in (d) is the power fit.