A less invasive way to stimulate the mouse brain with light

You can’t peer very far down into a well or below the surface of the ocean before things go dark—light does not penetrate to such depths. Though the brain is far from bottomless, neuroscientists face the same lack of light when they try to study living deep-brain structures. This is especially frustrating given that optogenetics, a method for manipulating genetically tagged brain cells with light, has exploded in popularity over the past decade. “Optogenetics has been a revolutionary tool for controlling neurons in the lab, and hopefully someday in the clinic,” says Thomas McHugh, research group leader at the RIKEN Brain Science Institute in Japan. “Unfortunately, delivering light within brain tissue requires invasive optical fibers.”

McHugh and colleagues now have a solution for sending light to new depths in the brain. As they report in Science on February 9, upconversion nanoparticles (UCNPs) can act as a conduit for laser light delivered from outside the skull. These nanoparticles absorb near-infrared laser light and in turn emit visible photons to areas that are inaccessible to standard optogenetics. This method was used to turn on neurons in various brain areas as well as silence seizure activity and evoke memory cells. “Nanoparticles effectively extend the reach of our lasers, enabling the ‘remote’ delivery of light and potentially leading to non-invasive therapies,” says McHugh.

In optogenetics, blue-green light is used to turn neurons on or off via light-responsive ion channels. Light at these wavelengths, however, scatters strongly and is at the other end of the spectrum from the near-infrared light that can penetrate deeper into brain tissue. UCNPs composed of elements from the lanthanide family can act as a bridge. Their ‘optogenetic actuation’ turns low-energy near-infrared laser light into blue or green wavelengths for control of specifically labeled cells. Though such bursts of light deliver considerable energy to a small area, temperature increases or cellular damage were not observed.

In addition to activating neurons, UCNPs can also be used for inhibition, for example to quell experimental seizures in mice. The researchers injected nanoparticles tuned to emit green light into the hippocampus and then energized them with laser pulses at the surface of the skull. Hyperexcitable neurons were effectively silenced in these mice. In another brain area called the medial septum, nanoparticle-emitted light contributed to synchronizing neurons in an important brain wave called the theta cycle. And in mice with learned fear memories, the freezing behavior associated with these experiences was evoked by blue light-emitting UCNPs, also in the hippocampus. Neural activation, inhibition, and memory recall effects were only observed in mice that received nanoparticle-mediated optogenetic stimulation, not in control animals that received laser light without a UCNP injection.

Memory recall in mice also persisted in tests two weeks later. This indicates that the UCNPs remained at the injection site, which was confirmed through microscopy of the brains. “The nanoparticles appear to be quite stable and biocompatible, making them viable for long-term use. Plus, the low dispersion means we can target neurons very specifically,” says McHugh. The nanoparticles described in this study are compatible with the various light-activated channels currently in use in the optogenetics field and can be employed for neural activation or inhibition in many deep brain structures. Nanoparticles could become a minimally invasive alternative to optical fibers for brain stimulation, and their chronic interaction with brain tissue is part of ongoing research.

This study was a collaboration between scientists at the RIKEN Brain Science Institute, the National University of Singapore, the University of Tokyo, Johns Hopkins University and Keio University 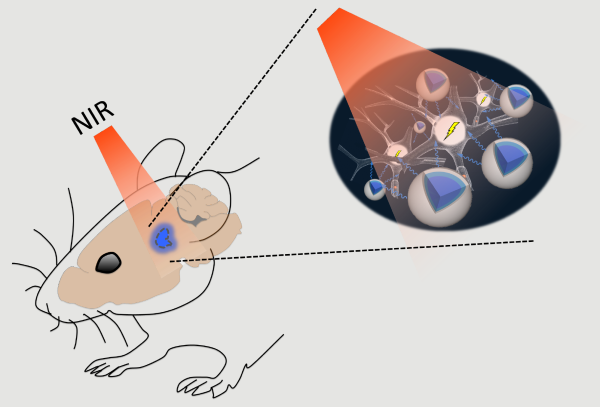 Schematic of the stimulation process

Near-infrared (NIR) light applied above the skull can easily pass through brain tissue with minimal scattering and reach deep structures. Up-conversion nanoparticles (UCNPs; blue) in the tissue can absorb this light and locally emit visible light sufficient to activate light-sensitive channels expressed in nearby neurons.

Non-invasive activation of neurons in the ventral tegmental area (VTA), a reward center of the mouse brain. The blue-light sensitive ChR2 channel (green) was expressed on both sides of the VTA, however UCNPs (blue) were only injected on the right. NIR light was applied to both sides, however it only activated the expression of the activity-induced cFos gene (red) on the side with the nanoparticles.