Spin-based quantum computers have the potential to tackle difficult mathematical problems that cannot be solved using ordinary computers, but many problems remain in making these machines scalable. Now, an international group of researchers led by the RIKEN Center for Emergent Matter Science have crafted a new architecture for quantum computing. By constructing a hybrid device made from two different types of qubit—the fundamental computing element of quantum computers—they have created a device that can be quickly initialized and read out, and that simultaneously maintains high control fidelity.

In an era where conventional computers appear to be reaching a limit, quantum computers—which do calculations using quantum phenomena—have been touted as potential replacements, and they can tackle problems in a very different and potentially much more rapid way. However, it has proven difficult to scale them up to the size required for performing real-world calculations.

In 1998, Daniel Loss, one of the authors of the current study, came up with a proposal, along with David DiVincenzo of IBM, to build a quantum computer by using the spins of electrons embedded in a quantum dot—a small particle that behaves like an atom, but that can be manipulated, so that they are sometimes called “artificial atoms.” In the time since then, Loss and his team have endeavored to build practical devices.

There are a number of barriers to developing practical devices in terms of speed. First, the device must be able to be initialized quickly. Initialization is the process of putting a qubit into a certain state, and if that cannot be done rapidly it slows down the device. Second, it must maintain coherence for a time long enough to make a measurement. Coherence refers to the entanglement between two quantum states, and ultimately this is used to make the measurement, so if qubits become decoherent due to environmental noise, for example, the device becomes worthless. And finally, the ultimate state of the qubit must be able to be quickly read out.

While a number of methods have been proposed for building a quantum computer, the one proposed by Loss and DiVincenzo remains one of the most practically feasible, as it is based on semiconductors, for which a large industry already exists.

For the current study, published in Nature Communications, the team combined two types of quits on a single device. The first, a type of single-spin qubit called a Loss-DiVincenzo qubit, has very high control fidelity—meaning that it is in a clear state, making it ideal for calculations, and has a long decoherence time, so that it will stay in a given state for a relatively long time before losing its signal to the environment.

Unfortunately, the downside to these qubits is that they cannot be quickly initialized into a state or read out. The second type, called a singlet-triplet qubit, is quickly initialized and read out, but it quickly becomes decoherent. For the study, the scientists combined the two types with a type of quantum gate known as a controlled phase gate, which allowed spin states to be entangled between the qubits in a time fast enough to maintain the coherence, allowing the state of the single-spin qubit to be read out by the fast singlet-triplet qubit measurement.

According to Akito Noiri of CEMS, the lead author of the study, “With this study we have demonstrated that different types of quantum dots can be combined on a single device to overcome their respective limitations. This offers important insights that can contribute to the scalability of quantum computers.” 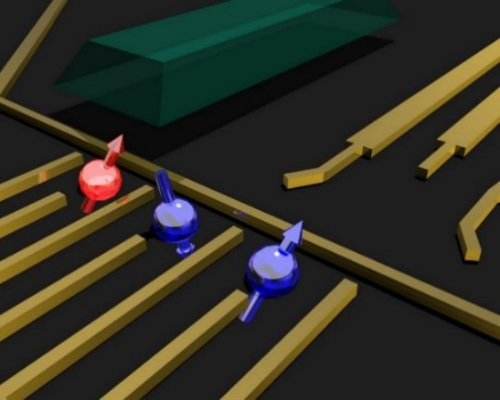