In a discovery that could provide new insights into the origin of mass in the universe following the Big Bang, scientists from the international J-PARC E15 Collaboration, led by researchers from the RIKEN Cluster for Pioneering Research (CPR) have used experiments with kaons and helium-3 to experimentally demonstrate, for the first time, the existence of an exotic nucleus containing two protons and a bound kaon.

Kaons are a type of meson — a group of extremely short-lived particles that mediate the strong force that binds protons and neutrons inside the atomic nucleus, consisting of an anti-quark and quark pair. The existence of mesons was first proposed by Japanese physicist Hideki Yukawa in 1935, and after they were discovered to exist he became the first Japanese to receive a Nobel Prize for his efforts. K mesons have recently become an important topic of research, as they usually exist as “virtual particles” that pop in and out of existence in the nucleus, but it might become real bound particle in a nucleus and become for a fleeting moment a part of an exotic nucleus, along with the typical neutrons and protons, since there is a slight time lag before the anti-quark and quark annihilate. Understanding how this happened could provide insights into mysteries such as the origin of mass and the quantum phenomenon of “color confinement.” However, this state had never been observed in the real world.

To investigate this, the research group launched experiment to try to bind a kaon to a nucleus. To do the experiment, the researchers decided to use a helium-3 target — a nucleus made up of two protons and a single neutron. By knocking out a neutron from the helium-3 target they were able to greatly reduce the energy of the kaon by using the recoil from the ejection and replacing the neutron with a kaon, forming a tightly bound nucleus with two protons and a single kaon.

"What is important about this research,” says Masahiko Iwasaki, the leader of the team, “is that we have shown that mesons can exist in nuclear matter as a real particle — like sugar that is not dissolved in water. This opens up a whole new way to look at and understand nuclei. Understanding such exotic nuclei will give us insights into the origin of the mass of nuclei, as well as to how matter forms in the core of neutron stars. We intend to continue experiments with heavier nuclei to further our understanding of the binding behavior of kaons.”

The current work, published in Physics Letters B, was performed by an international collaboration involving scientists from RIKEN CPR together with KEK, JAEA, J-PARC, Osaka University, Tohoku University, INFN (Italy), SMI (Austria) and others. 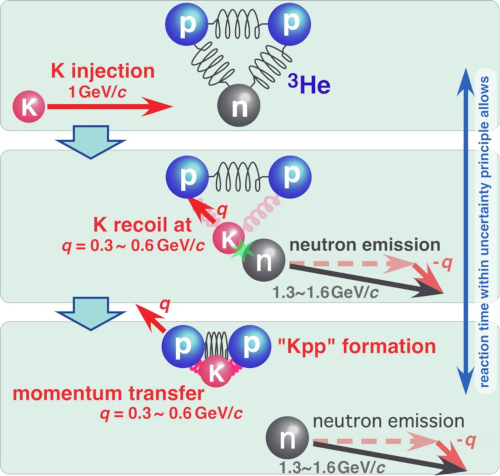