Scientists at the RIKEN Center for Brain Science (CBS) have discovered that when a normal cellular cleanup process is disrupted, mice start behaving in ways that resemble human symptoms of autism spectrum disorder (ASD) and schizophrenia. They found that loss of normal autophagy—the process used to recycle damaged cellular components such as proteins— influences how brain cells react to inhibitory signals from each other and contributes to the behavioral changes. This intricate signaling pathway could be a new therapeutic target for neurodevelopmental and neuropsychiatric disorders.

Like city streets with no garbage collection, cells can get choked if autophagy is not working properly. The autophagy process is controlled by a biological signaling pathway called mTOR. Greater than normal activation of mTOR is associated with several neurological disorders, and mutations in some components have been found in patients with ASD. The researchers from CBS thus had an inkling that abnormal protein cleanup affects how neurons work and can lead to downstream manifestations of psychiatric symptoms. Their study, published on April 10 in the open-access journal Science Advances, confirms that social behavior deficits in mice can result from a breakdown in autophagy and a build-up of unwanted protein.

For autophagy to begin, cells need to contain a protein encoded by the gene Atg7. The researchers made knockout mice by selectively deleting this gene from two cell populations, excitatory and inhibitory interneurons, which are known to be the malfunctioning culprits in many neurodevelopmental and neuropsychiatric disorders. The mice in both groups displayed overlapping behavioral abnormalities such as increased anxiety and reduced social interaction and nesting. “The loss of autophagy in different types of neurons had the same behavioral effects, which hinted that a common mechanism was at work,” says Motomasa Tanaka, senior author and team leader at RIKEN CBS.

Picking through the cellular ‘trash’ that accumulated in the affected cells, the researchers identified aggregates of proteins made up of GABARAPs, a group of proteins that help bring receptors for the main inhibitory neurotransmitter GABA to the cell surface. Not only had these proteins accumulated, they were being dumped into p62+ aggregates, formed when autophagy is disrupted in cells. “Think of autophagy as the recycling depot and p62 as the garbage trucks that go around the cell to pick up trash labelled for recycling,” explains first author Kelvin Hui. “When the recycling depot experiences a shutdown or reduced capacity, p62 has nowhere to bring this garbage and it starts to pile up in the cell, leading to major problems.”

The major problem in this case is that neurons could not communicate normally: with trapped GABARAPs, the GABA receptors were not transported to the cell surface and the neurons became hyperactive. The research team also looked at post-mortem human brain samples from a subset of patients with ASD and observed the same protein aggregation and increase of p62. This finding, together with previous research on genetic deletions in patients with ASD and intellectual disability, further implicates disrupted autophagy and protein aggregation in the pathogenesis of these conditions.

“This is the first demonstration of a link between mTOR-autophagy and GABA signaling,” notes Hui. “Changes in these processes are also seen in cancer and diabetes, so it is of great clinical importance to examine whether the molecular mechanism that we have uncovered here is also involved in those diseases.” Given the role of protein aggregation in neuronal and behavioral abnormalities, the research team views small molecules that can disrupt the harmful protein aggregation as potential novel therapeutic factors for neurodevelopmental and neuropsychiatric disorders. 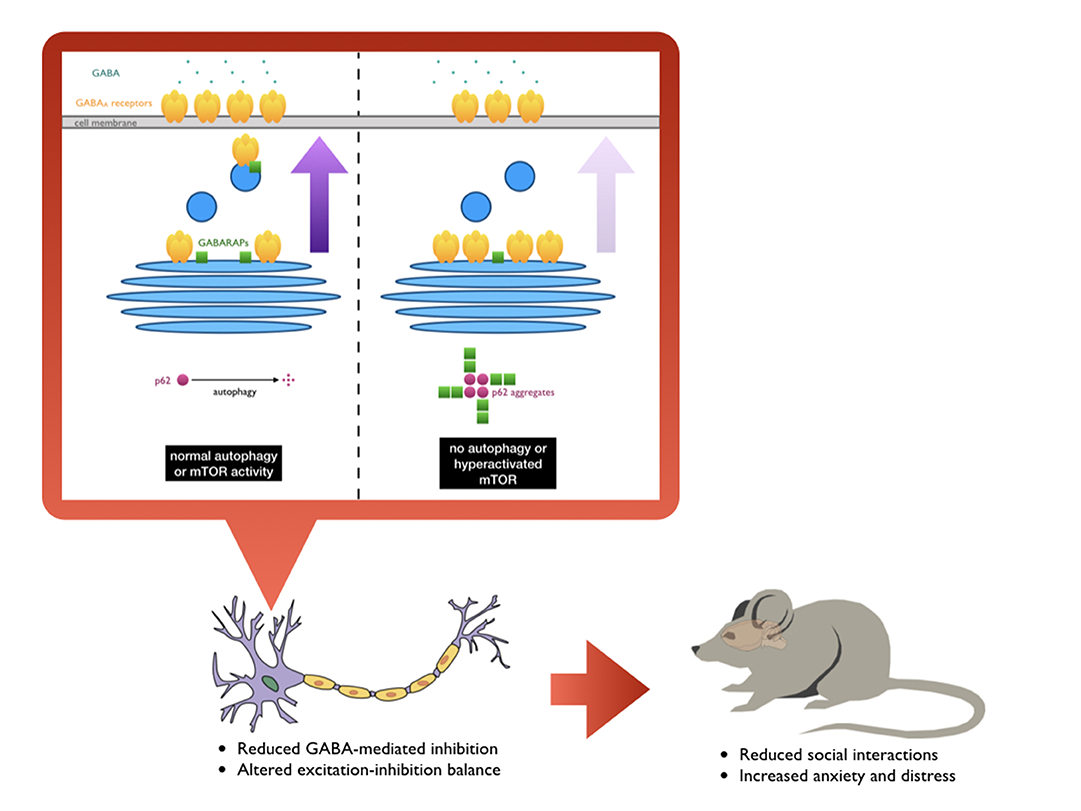 Effective cleanup is needed for brain cells to communicate properly

A pileup of p62 under certain pathogenic conditions acts as a sink for GABARAPs, thereby preventing them from their normal functions of transporting GABAA receptors to the cell's surface. The reduction of GABAA receptors on brain cells prevents them from receiving inhibitory messages from their neighbors, in turn causing them to become hyperactive. When different brain regions cannot communicate with each other effectively, it ultimately leads to behavioral deficits often served in patients with autism or schizophrenia.