Flies smell through a gore-tex system

New insights into the formation of surface nanostructures

The male peacock has beautiful feathers to attract mates, and lotus leaves are highly water-repellent thanks to elaborate surface structures. Both the colorful feathers and the ability to repel water are due to patterns of tiny surface structure on the nanometer (one millionth of a milimeter) scale. Although such surface structures are common in nature, the way they develop and the biological mechanisms underlying their formation are not well understood. Now, a research group led by Shigeo Hayashi of the RIKEN Center for Biosystems Dynamics Research (BDR) has gained important insights into how the nanopores that allow the fruit fly to detect chemicals in the air are formed, and has identified the gene responsible for their development.

Insects have external skeletons, called exoskeletons, which help them survive in harsh environments and protect them from predators, helping them to spread almost all over the earth. The ability to smell airborne odorants also contributes to the ability to search for foods, mates and other environmental cues. In insects, the cuticle covering sensilla — olfactory organs found on the antennas of insects — has small pores with diameters between 50 and 200 nanometers. Those nanopores are believed to function as filters that allow odorant molecules to enter but prevent the entry of larger airborne particles and help the insects avoid liquid loss.

To find out more about how these pores develop, the researchers observed the developing pupa of fruit fly in detail using transmission electron microscopy. They found that the cuticular nanopores in the fruit fly’s olfactory sensilla originate from a curved ultrathin film that is formed in the outermost envelope layer of the cuticle, and secreted from specialized protrusions in the plasma membrane of the hair-forming (trichogen) cell. The envelope curvature coincides with plasma membrane undulations associated with structures within the cells.

They then conducted an investigation of the genetics behind the formation of pores. Using next-generation genome sequencing, they discovered a gene — named gore-tex — that is responsible for the formation of the pores. Knocking out the gene did not lead to any deficits in morphology or affect the survival of flies, but it hampered the formation of pores on the sensilla and the ability to smell. Further analyses revealed that the gore-tex gene is a member of the gene family called Osiris, and encodes a protein that is essential for envelope curvature, nanopore formation, and odor receptivity, and is expressed specifically in developing olfactory trichogen cells. Other members of the Osirisgene family are expressed in cuticle-secreting cells, and they are only found in insect genomes.

“Our study revealed the elements required for the development of nanopores to allow odor reception, and identified Osiris genes as a platform for investigating the evolution of surface nano-fabrication in insects,” Hayashi says. “We hope that studies like this will help us understand how nature builds these fascinating nanostructures that allow living creatures to acquire many specialized functions.” 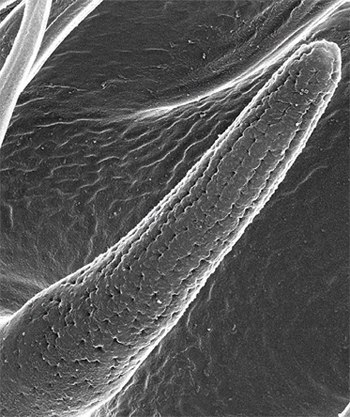 In fruit fly Drosophila melanogaster, the cuticle covering sensilla has many nanopores that allow odorant molecules to enter.