Researchers from an international collaboration have succeeded in creating a “protein cage”—a nanoscale structure that could be used to deliver drugs to specific places of the body—that can be readily assembled and disassembled but that is also extremely durable, withstanding boiling and other extreme conditions. They did this by exploring geometries not found in nature, but reminiscent of “paradoxical geometries” found in Islamic art.

Role-playing gamers—at least those who played before the digital age—are aware that there are restrictions governing the shape of dice; try to make a six-sided die by replacing the square faces with triangles and you will be left with something horribly distorted and certainly not fair. This is because there are strict geometrical rules governing the assembly of these so-called isohedra. In nature as well, isohedral structures are found at the nano level. Usually made from many protein subunits and having a hollow interior, these protein cages carry out many important tasks. The most famous examples are viruses where the protein cage acts as a carrier of viral genetic material into host cells.

Synthetic biologists, for their part, are interested in making artificial protein cages in the hope imparting them with useful and novel properties. There are two challenges to achieving this goal. The first is the geometry problem—some candidate proteins may have great potential utility but are automatically ruled out because they have the wrong shape to assemble into cages. The second problem is complexity—most protein-protein interactions are mediated via complex networks of weak chemical bonds that are very difficult to engineer from scratch.

The new research, published in Nature, began at the Heddle Initiative Research Unit at RIKEN in Japan and moved to Malopolska Centre of Biotechnology, Jagiellonian University in Poland. In it researchers found a way to solve both problems. “We were able to replace the complex interactions between proteins with simple ‘staples’ based on the coordination of single gold atoms.” explains Professor Jonathan Heddle, the senior author of the research. "This simplifies the design problem and allows us to imbue the cages with new properties such as assembly and disassembly on demand.”

The research has also found a way to get around the geometrical problem: “The building blocks of our protein cage are 11-sided rings.” says Ali Malay, the first author of the paper, who is currently in the RIKEN Center for Sustainable Resource Science. “Mathematically speaking such shapes should be forbidden from forming symmetrical polyhedra." However, the researchers found that due to inherent flexibility, protein complexes can achieve previously unprecedented constructions based on near-perfect geometrical coincidences. “Previously proteins that were ignored because they had the ‘wrong’ shape can now be considered.” says Malay.

The implications of the work are far-reaching, "What we, together with our collaborators have found, is simply the first step." says Heddle, who hopes that the work can be expanded further to produce cages with new structures and new capabilities and also investigated for potential applications particularly in drug delivery. 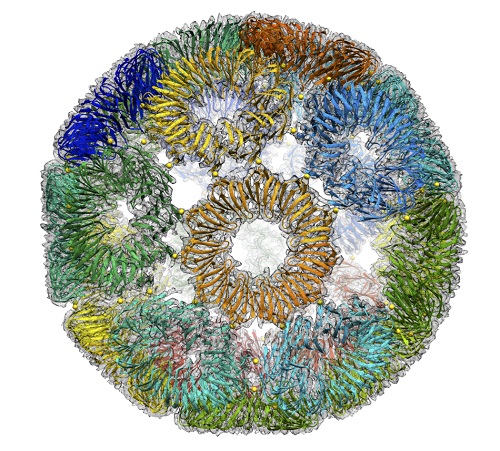 Structure of the artificial protein cage, with 24 11-mer protein rings held together by 120 gold atoms