Scientists have discovered a neurological origin for absence seizures—a type of seizure characterized by very short periods of lost consciousness in which people appear to stare blankly at nothing. Using a mouse model of childhood epilepsy, a team led by Kazuhiro Yamakawa at the RIKEN Center for Brain Science (CBS) in Japan showed that absence epilepsy can be triggered by impaired communication between two brain regions: the cortex and the striatum. This study was published in the journal Nature Communications.

Epileptic seizures come in several varieties. Most are familiar with tonic-clonic seizures, which are characterized by large convulsions. However, several kinds of childhood epilepsy are characterized absence seizures in which children experience widespread erratic brain activity that leaves them unconscious for a number of seconds, but without any convulsions. Absence seizures are associated with spike-wave discharges (SWDs)—irregular brain activity that can be recorded on electrocorticograms. While some medications are available, a clearer understanding of how these types of seizures begin in the brain will lead to the development of better therapies.

Because children with these types of epilepsy often have mutations in the STXBP1 or SCN2A genes, scientists have created mouse models of these childhood epilepsies by mutating these genes. For both genes, the team at RIKEN CBS created mice with one normal gene and one mutated gene—a condition called haplodeficiency, which is different from a complete knockout. After establishing that their mice experienced absence seizures, as evidenced by SWDs over the somatosensory cortex, they performed a series of experiments to determine how they were triggered.

SWDs can be blocked by drugs than inhibit neurons from exciting each other. The scientists injected a neuronal inhibitor into several brain regions hoping to find which ones were related to the seizures. They found three regions: somatosensory cortex, the thalamus, and a part of the striatum beneath the cortex. Although many have thought that the thalamus and the somatosensory cortex are the primary sources for absence seizures, further experiments showed that the region critical for triggering the seizures was actually in the striatum.

After finding that injecting a neuron-exciting drug only into the striatal region of the model mice reliably induced SWDs, they created mice with mutations limited to only neurons in the somatosensory cortex that were connected to the striatum. These mice showed the same SWDs, meaning that absence seizures were triggered by faulty signals arriving in the striatum. An additional experiment showed that the problem arose because transmission specifically to fast-spiking interneurons in the striatum was too weak.

These findings were somewhat unexpected. As Yamakawa explains, “although the cortico-thalamic circuit has long been assumed to be the sole and exclusive causal source for absence epilepsy, we showed that it is actually triggered by impaired cortico-striatal excitatory transmission. This could be a paradigm shift for epilepsy research.”

As effective therapy for epilepsy depends on understanding the exact mechanisms through which seizures are generated, these findings will guide drug development in new directions that might prove more effective than today’s treatments. 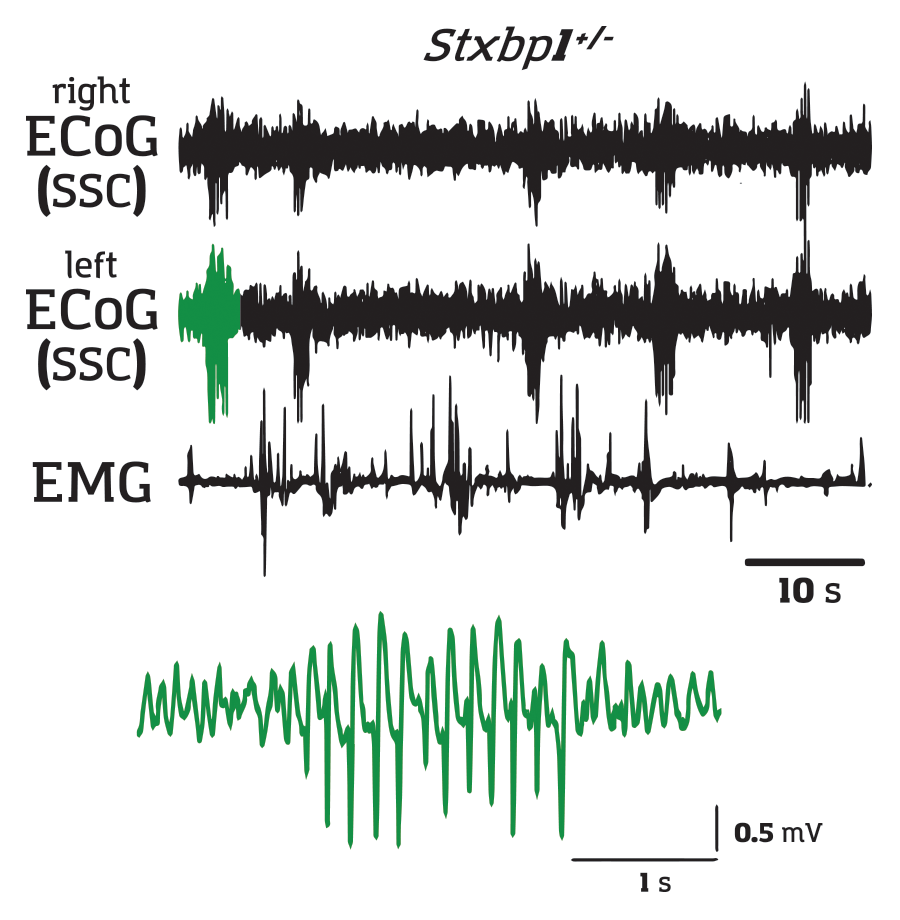 Spike-wave discharges in the brain of a model mouse

Spike-wave discharges can be seen in the electrocorticograms (ECoGs) from the left and right somatosensory cortices (SSCs) of an Stxbp1+/− mouse. A portion of the spike-wave discharge is expanded in green below.