Neuroscientists at the RIKEN Center for Brain Science (CBS) and University College London have found an anatomical link between cognitive and perceptual symptoms in autism. Published in the Journal of Neuroscience, the study identified a posterior region of the brain whose amount of gray matter is related to both cognitive rigidity and overly stable visual perception, two symptoms of autism that until now were only conceptually related.

Mental inflexibility is a hallmark symptom of autism spectrum disorder (ASD). This is best seen in restricted and repetitive behaviors, which are required for an ASD diagnosis. These behaviors can range from stereotyped and repetitive movements to repetitive thoughts. Perception in people with ASD can also be less flexible than in others. This can be understood by considering a line drawing of a transparent cube (called a Necker cube, see Figure). When looking at this drawing, the 3-D structure of the cube seems to spontaneously invert; the front becomes the back and then becomes the front again. This type of perceptual switching is called "bistable" perception. In the case of autism however, perception is often overly stable, and does not switch back and forth as often as it does in others.

The team of researchers sought to find a physical neuroanatomical link between these two characteristics of autism. They recruited people with and without ASD to perform two simple computer-based tests and an MRI scan. The first computer test assessed perceptual stability. Participants viewed a bistable image in which the front and back of a cylindrical shape switch back and forth. The second test evaluated cognitive rigidity, and was designed specifically for this study. Participants were shown shapes on a display and asked to choose a rule to follow: select the brightest shape or a specific shape. The researchers counted the number of times each participant reported a switch in perception during the first test and the number of times they spontaneously switched rules in the second test. These measures allowed the researchers to quantify perceptual stability and cognitive rigidity for each participant.

As expected, they found that perception of the bistable image switched much less frequently in people with ASD than in the control participants. They also found that people with ASD repeated the same rule choice—brightness or shape—for longer periods of time before switching rules. A control switching test in which participants were told to switch rules did not differ between groups, meaning that switching rules was not difficult for those with ASD, but that when acting freely, they chose to switch less often than the other participants.

The results from the rule-switching task were particularly encouraging. As first author Takamitsu Watanabe from RIKEN CBS explains, “cognitive rigidity in high-functioning autism is known to be difficult to detect and quantify in conventional psychological paradigms. Here, we overcame this issue with a new spontaneous task-switching test.” With these results, the team was confident that their tests were good measures of perceptual stability and cognitive rigidity.

The team then took these individual scores and tested whether they correlated with the brain anatomy seen on the MRI scans. They found that one part of the brain in particular was related to both perceptual stability and cognitive rigidity. Lower density of neurons in the posterior superior parietal lobule was associated with both less frequent perceptual switching and less frequent rule switching, and was also associated with the severity of the participant’s restricted and repetitive behaviors.

“We think that the posterior superior parietal lobule is the neural basis for both overly stable perception and cognitive inflexibility, two seemingly different symptoms in autism,” says Watanabe. “Knowing the importance of this brain region, we can now work to identify how it produces its effects and test whether manipulating its neural activity can mitigate these ASD symptoms.” 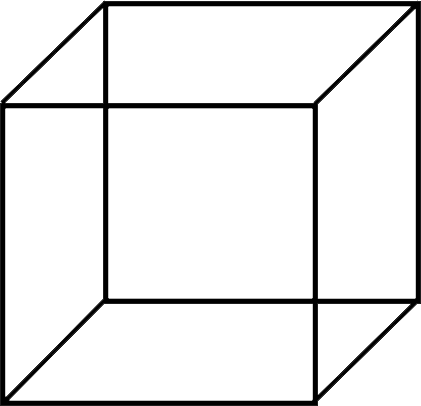 The Necker cube is a bistable image in which perception of the front and back of the cube spontaneously invert back and forth. 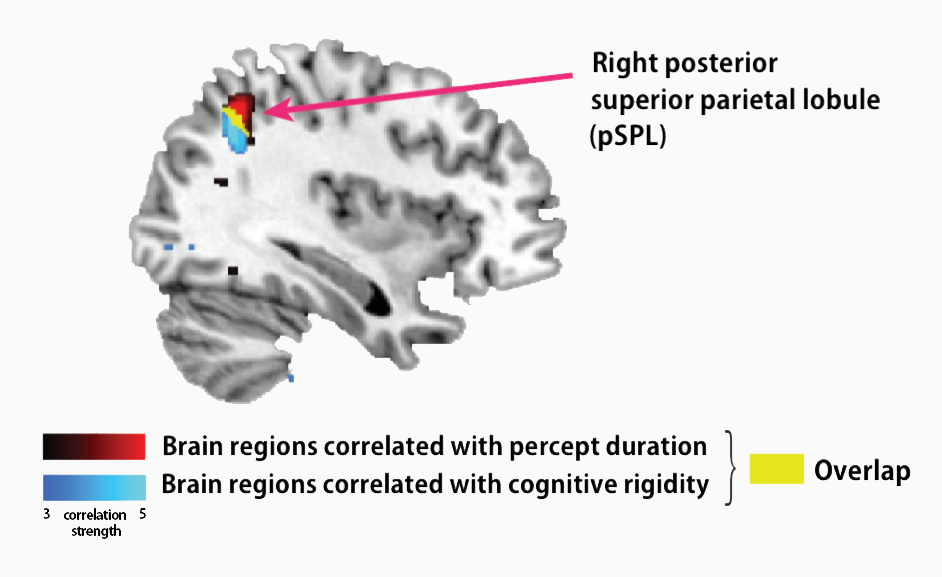