RIKEN researchers have developed a promising method to deliver a drug to cancer cells without affecting surrounding tissues, involving a clever combination of an “artificial metalloenzyme” that protects a metal catalyst, and a sugar chain that guides the metalloenzyme to the desired cells.

In the field of organic synthetic chemistry, many metal catalysts have been developed with the capacity to synthesize molecules such as drugs and functional materials. Recently, researchers have begun to focus on chemical reactions in living bodies catalyzed by transition metals —elements belonging to groups 3 to 11 on the periodic table. However, they have run into difficulties: transition metal catalysts are easily “quenched” — meaning they are inactivated by substances such as antioxidants, so it has been difficult to get them to perform chemical reactions in actual organisms.

The international research team including Chief Scientist Katsunori Tanaka of the RIKEN Cluster for Pioneering Research and RIKEN Baton Zone Program and Special Postdoctoral Researcher Kenward Vong developed an artificial “metalloenzyme” that contains a metal ion and is able to save the ion from being quenched, making it possible for the chemical reaction to take place in vivo. The metal ion in this case was ruthenium, which catalyzes a “pro-drug” into umbelliprenin, a plant-derived compound known to have anti-cancer activity. Further, by attaching a sugar “delivery tag” to the surface of the artificial metalloenzyme, they were able to target it specifically to cancer cells where the drug was needed.

To perform the work, the group worked with a protein called human serum albumin, which is abundant in the human body. The researchers introduced a ruthenium catalyst into the hydrophobic “pocket” inside the protein. They found that in vitro, the ruthenium was able to carry out chemical reactions. “We were pleasantly surprised,” says Tanaka, who led the group, “that our newly developed metalloenzyme worked well in the presence of glutathione, an antioxidant that is abundant in actual cells and can inactivate ruthenium. This told us that the ruthenium catalyst is well protected from hydrophilic components such as glutathione in the hydrophobic pocket of the albumin molecule, while hydrophobic compounds can come in contact with the catalyst within the pocket and undergo catalysis.”

After determining that the catalysis would work, the researchers modified the surface of the albumin, attaching sugar chains that allowed it to be transported to specific cells of interest. Target cells are recognized by the pattern of sugar chains. Doing this, they successfully delivered the catalyst to cancer cells, and used it to produce umbelliprenin, which they determined actually had cytotoxic effects on the cancer cells.

"We confirmed that the method we developed can be applied to metal-catalyzed reactions using other catalysts such as gold, and the artificial metalloenzyme could be generally used in vivo,” adds Tanaka. “If transition metal catalysis can be performed on specific organs or diseased cells in the body, it will allow us to rapidly and stably synthesize drugs there, minimizing side effects. Our findings could become a key in the fight against such diseases. Furthermore, we can consider using other natural compounds, which show strong anti-cancer activity but have not been used so far. We have opened a door to a new era where we can synthesize and activate natural chemical compounds in actual organisms.” 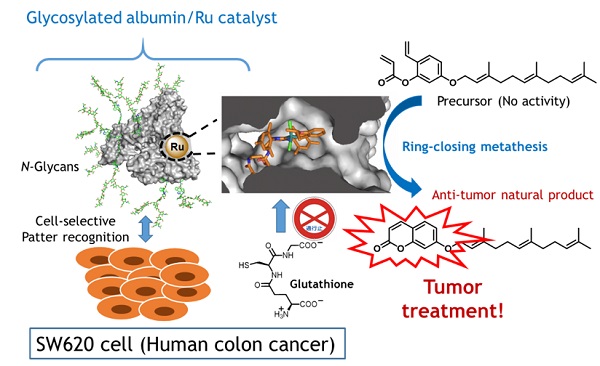 Newly developed method to deliver a drug to cancer cells by using an artificial metalloenzyme that protects a metal catalyst (Ru), and a sugar chain (N-Glycans) that guides the metalloenzyme to the target cells.