Scientists at the RIKEN Center for Biosystems Dynamics Research (BDR) in Japan have developed the first microchip valve powered by living cells. Earthworm muscle tissue allowed for a high contractile force that could be sustained for minutes, and unlike electrically controlled valves, did not require any external power source such as batteries.

For several decades, researchers have been trying to combine microelectromechanical systems (MEMS) with living material. Bio-MEMS have many applications, ranging from improved drug delivery and optical and electrochemical sensors to organs-on-chips. The team of researchers from RIKEN BDR and Tokyo Denki University have been developing a bio-MEMS that is driven by real muscle, which could be useful in surgical implants. Building on their on-chip micropump design, the new study is the proof-of-concept for an on-chip muscle-driven valve.

In mechanics, an actuator is the part of a machine that controls a mechanism by making it move, such as the opening and closing of a valve. Actuators require a power source and a control signal, which are typically electric current or some kind of fluid pressure. The main advantage for using muscles as actuators in bio-MEM systems is that they can be powered the same way as they are in living bodies: chemically. For muscles, the signal for contraction is the molecule acetylcholine—which is delivered by neurons—and the energy source is adenosine triphosphate (ATP)—which exists inside muscle cells.

“Not only can our bio-MEMS work without an external power source, but unlike other chemically driven valves that are controlled by acids, our muscle-driven valve runs on molecules that are naturally abundant in living organisms,” says first author Yo Tanaka from RIKEN BDR. “This makes it bio-friendly and especially suited for medical applications in which the use of electricity is difficult or not advised.”

The team initially determined that a small 1 cm × 3 cm sheet of earthworm muscle could produce an average contractile force of about 1.5 milli-newtons over a 2-min period when stimulated by a very small amount of acetylcholine. Using this data, they build a microfluid channel and valve on a 2 cm × 2 cm microchip that could be controlled by the contraction/relaxation of earthworm muscle.

To test the system, they used a microscope to monitor fluorescently labeled microparticles in liquid as they flowed through the microchannel. When acetylcholine was applied, the muscle contacted. The resulting force was transduced to a bar that was pushed down to close the valve, which successfully stopped the flow of liquid. When the acetylcholine was washed away, the muscle relaxed, the valve re-opened, and the fluid flowed again.

“Now that we have shown that on-chip muscle-driven valves are possible, we can work on improvements that will make it practical,” says Tanaka. “One option is to use cultured muscle cells. This might enable mass-production, better control, and flexibility in terms of shape. However, we will have to account for the reduction in the amount of force that can be produced this way compared with real muscle sheets.”

The study was published in Scientific Reports on July 8. 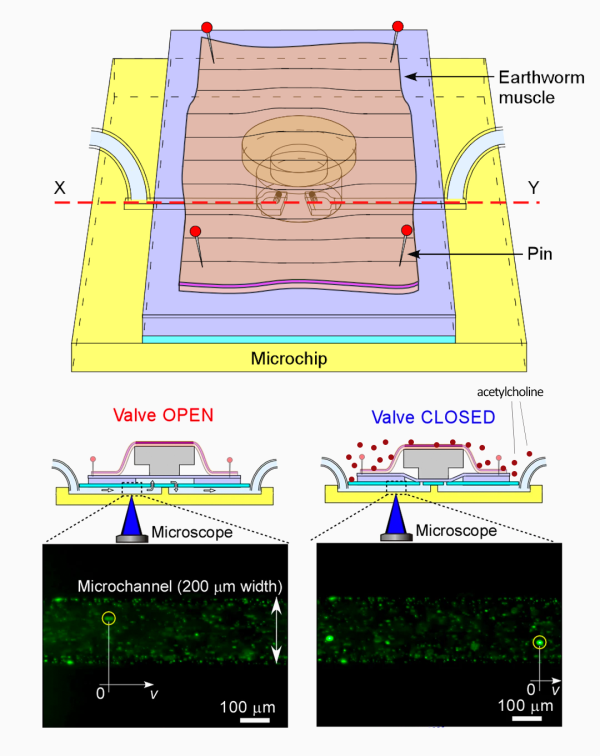 A valve on a 2 × 2 cm chip powered by earthworm muscle. (top) Design of the valve seen from above. A sheet of earthworm muscle covers a pushbar that sits above a microchannel. (bottom) Cross-sectional views through the microchannel when the valve is open (left) and closed (right). Still images of fluorescently labeled microparticles were taken from the video clip at the top of the article.