How chromosomes change their shape during cell differentiation

The human genome is made up of 46 chromosomes, each of which has a length of about 100–200 million base pairs, base pairs being the building blocks of the DNA double helix. Even during interphase, the period in between the cell division phases, chromosomes are still tightly packed inside the cell nucleus. If one zooms in on each chromosome, a regular structural unit called the nucleosome is evident, which corresponds to a 146-base pair long strand of DNA wrapped around eight histone protein molecules. Until recently, no other regular structures beyond the nucleosomes were known.

Thanks to the emerging genomics-based technology called Hi-C (high-throughput chromosome conformation capture), however, we now know that there are regular structural units at the megabase scale, referring to millions of base pairs. It is now generally accepted that mammalian chromosomes are comprised of megabase-sized globular units called topologically associating domains (TADs), which are separated by boundaries, presumably in a beads-on-a-string manner. Further, multiple TADs assemble to form what are called A and B subnuclear compartments. TADs containing many active genes form A compartments, while TADs with few or no active genes form B compartments.

Importantly, this single-TAD-level switching of compartments was confirmed in single cells by a method, called single-cell Repli-seq, which was recently developed by the research team to analyze DNA replication regulation genome-wide in single cells (note that replication timing correlates very well with A/B compartments). The team also found that A/B compartment profiles changed gradually but uniformly within a differentiating cell population, with the cells transiently resembling the epiblast-derived stem cell (EpiSC) state, an advanced form of stem cells compared to ESCs.

Taken together, the team’s finding suggests that A/B compartments change primarily by the relocation of single TADs facing the A/B compartment interface to the opposite compartment. “It is possible,” says Ichiro Hiratani, the leader of the group, “that the accumulation of these compartment switching events may reflect or represent changes in differentiation states such as from ESCs to EpiSCs.”

In this way, this study, published in Nature Genetics, explains how chromosomes undergo structural changes during cell differentiation. According to Hiratani, “Our study was the first to clearly demonstrate that changes in chromosome conformation preceded changes in DNA-based transactions such as gene expression and DNA replication timing. Intriguingly, chromosome conformation changes were regulated at the level of single TADs. We are eager to explore the basis of such single-TAD-level regulation of chromosomes and entertain the possibility of predicting DNA transactions based on preceding changes in chromosome structures.” 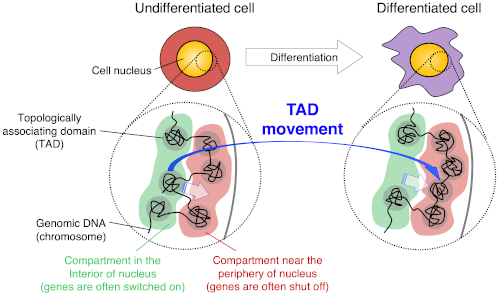