A sustained state of vigilance will generate a different type of memory than a momentary startle, and these differences are linked to distinct signaling molecules in the brains of mice. Researchers at the RIKEN Center for Brain Science (CBS) have visualized these dynamics in the living mouse brain for the first time, observing fast and slow molecular pathways that support memory function. These processes take place in brain cells called astrocytes, revealing another important way in which these cells help neurons.

Norepinephrine, also called noradrenaline, is a dual hormone and neurotransmitter that prepares the body for action. Previous research has shown that norepinephrine release is important for modifying synapses, the connections between neurons that form and consolidate memories. Astrocytes are the crucial mediators of these changes, and the researchers were interested in observing, in real time, what happens in these cells when mice are learning. Their study was published in Nature Communications on January 24.

To see how these fast and slow molecular responses are triggered naturally, mice were given random air puffs to the face to evoke a brief startle response. In this situation, cAMP levels did not go up at all, while calcium became elevated as previously observed. In a second experiment, mice were given a foot shock coupled with a sound to create a fear memory. When they heard the sound again, the mice would freeze in anticipation of a shock. This time, cAMP levels were noticeably elevated, while calcium levels also rose but quickly tapered off. “When mice are in this sustained state of vigilance, a lot of norepinephrine is released, coupled with gradually building cAMP,” explains first author Yuki Oe, a research scientist in Hirase’s group. “This reflects how the astrocytes support the formation of fear memory.” Neither calcium nor cAMP responses were seen in mice that were given norepinephrine-blocking drugs, indicating that norepinephrine release is indeed the trigger for these changes.

The short-term and long-term consequences of norepinephrine release in the brain thus depend on the situation and behavior. Memory formation, in particular, seems to be supported by increases in cAMP levels, while transient or low vigilance states involve short-term elevated calcium. “One of the effects of cAMP is to break down glycogen for quick energy in a fight-or-flight situation,” comments Hirase. “This boosting of energy metabolism could help consolidate memories over longer time scales, while rapid calcium boosts could lower the threshold for synaptic plasticity.” 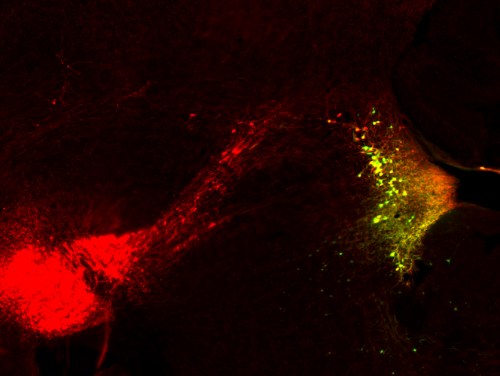 Norepinephrine neurons in the mouse brain