A RIKEN research team has established an optimized three-dimensional (3D) tissue-staining and observation technique based on existing tissue clearing technology. Published in Nature Communications, the study details how the new technique can be used to stain tissue and label cells in mouse brains, human brains, and whole marmoset bodies. This technique will allow detailed anatomical analysis and whole-organ comparisons between species at the cellular level.

Tissue clearing allows 3D observation of organs using an optical microscope. In 2014, a research team led by Etsuo Susaki and Hiroki Ueda at the RIKEN Center for Biosystems Dynamics Research (BDR) in Japan developed a 3D tissue clearing technology called CUBIC, which can image the whole body at the single-cell level by making tissue transparent.

While tissue clearing can result in fantastical images, by itself it does not have much scientific value. In order for tissue clearing to be meaningful, scientists need to be able to stain and label specific tissues and cell types, which can then be studied. This requires a system that works with a wide range of staining agents and antibodies. Although several types of 3D staining and labeling methods have been attempted, none has been versatile enough.

Realizing that they needed a better understanding of body tissue, the team at BDR and their colleagues performed detailed physical and chemical analyses. They found that biological tissues can be defined as a type of electrolyte gel.

Based on the tissue properties they discovered, they constructed a screening system to examine a series of conditions using artificial gels that can mimic biological tissues. By analyzing the staining and antibody labeling of artificial gels with CUBIC, they were able to establish a fine-tuned, versatile 3D-staining/imaging method, which they named CUBIC-HistoVIsion. By using this optimized system with high-speed 3D microscopic imaging, they succeeded in staining and imaging the whole brain of a mouse, half a marmoset brain, and a square centimeter of human brain tissue. Whole-body 3D imaging of an infant marmoset was also successful. The system worked well with about 30 different antibodies and nuclear staining agents, making it useful for scientists in many different fields, from studying the brain to studying kidney function.

The system can be used for many purposes, one of which is to compare whole-organ anatomical features among species. CUBIC-HistoVIsion revealed that the overall distribution patterns of blood vessels in the brains of mice and marmosets are very similar and thus likely evolutionarily preserved. At the same time, they found that glia-cell distribution in the brain’s cerebellum differed between humans, mice, and marmosets. The authors speculate that these differences in glia patterning could lead to the well-known structural differences in the cerebellum among species.

“The 3D staining method developed in our study surpasses the performance of the typical staining methods published so far and is the best method in the world at present,” says Susaki. “It also provides a paradigm shift in the development of methods in tissue chemistry, such as the construction of staining protocols based on tissue properties. These results are expected to contribute to the understanding of biological systems at organ and organism scales, and to the improvement of the diagnostic accuracy and objectivity of 3D clinical pathology examination.” 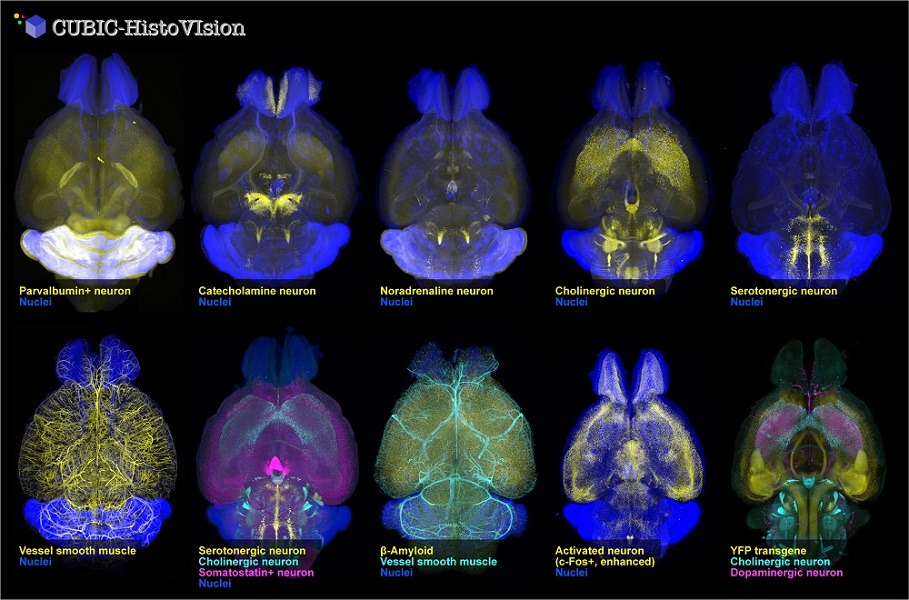 Examples of CUBIC Histo-VIsion stains to visualize neurons and blood vessels in the mouse brain.