Researchers from a collaboration led by the RIKEN BioResource Science Center in Japan have analyzed agricultural systems using a multiomics approach, and successfully digitalized the complex interactions between plants, microbes and soil in an agricultural field. Using the new approach, they made the surprising finding that organic nitrogen plays a key role in promoting plant growth. The study, published in the Proceedings of the American Academy of Sciences, could pave the way toward more sustainable agricultural practices.

In 1840, the German scientist Justus von Liebig proposed that plants required the input of minerals—particularly nitrogen—to grow properly. Then, in the early 20th century, the development of the Haber-Bosch process made it possible to produce large amounts of nitrogen-based fertilizers, revolutionizing agriculture. However, there has been a price. Fertilizers typically use inorganic nitrogen, which leaches through the soil into water, leading to contamination.

As a response to this, various ways are being explored to promote plant growth without harmful fertilizers. One is a method called “soil solarization,” which involves putting plastic sheets over a field to trap the heat of the sun. This raises the temperature of the soil and is believed to help prevent weeds and parasites that hamper the growth of plants. However, the mechanism that promotes plant growth is not fully understood.

To figure out why solarization works, the RIKEN-led team set up an experiment where they used a multitude of “omics” methods—looking at the metabolome (an examination of various metabolites), ionome (looking at the distribution of elements), microbiome (a comprehensive survey of microbial profile), and phenome (an examination of plant phenotypes)—to examine an experimental agricultural field. The field, which was used to grow Japanese mustard spinach (Brassica rapa Var. perviridis), was split into sections where solarization was used and a non-solarized one. These sections were further split into areas that were given either compost or chemical fertilizer.

The results confirmed previous studies, showing that the solarized area had fewer weeds and increased the weight of the plant shoots. The plants themselves had similar characteristics such as sugar content and leaf shape regardless of whether they were grown in the solarized area or not, leading the researchers to surmise that the difference was related to nutrition in the soil. Surprisingly, when the researchers did an analysis of compounds and elements in the soil, they found that there was no difference in inorganic nitrogen concentration between the solarized field and non-solarized one. The network analysis using digitalized information of agricultural field by multiomics led them to the suspicion that somehow sources of organic nitrogen, such as amino acids, were fueling the growth. They also found differences in bacteria that grow on the roots of plants, known as the rhizosphere, which are important in making nitrogen available to plants.

Though they were able to determine the importance of organic nitrogen, it is still unclear in what form this happens. To test further, they planted seeds in a germ-free environment, and sound that the growth was still maintained, implying that the plants were taking up organic nitrogen directly. They also found that certain forms of organic nitrogen, namely choline and alanine, encouraged growth even at very low concentrations, implying that they also act as biologically active compounds that promote growth.

According to Yasunori Ichihashi, the corresponding author of the study, “Digitalizing agroecosystems using multiomics is a very powerful tool for extracting key information in order to enhance crop production. Our findings imply that contrary to the long-held belief that mineral nutrition was most important for plant growth, organic nitrogen can also contribute to plant nutrition. This could pave the way to decreased use of chemical fertilizers in future crop production, helping to attain one of the important Sustainable Development Goals.” 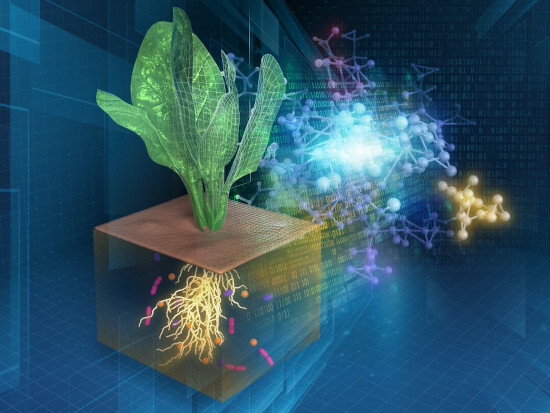 Artist's interpretation of the experiment