Researchers led by Takeo Yoshikawa at the RIKEN Center for Brain Science in Japan have discovered a biomarker that can detect autism spectrum disorder (ASD) in preschool-aged children. Published in Brain Communications, the new study found that levels of the protein FABP4 were much lower in four- to six-year-old children with ASD than they were in other typically developing children. Experiments in mice that lacked FABP4 revealed changes in neurons that resemble those found in the postmortem brains of people with ASD.

ASD is a developmental disorder that begins in early childhood and affects learning, communication, and social behavior. The severity of symptoms falls on a broad spectrum, which researchers believe is related to genetic and environmental factors that interact during brain development. Because young children with ASD are at particular risk for being overweight, the RIKEN CBS group hypothesized a link between ASD and fat-cell metabolism.

Fat cells make hundreds of important biomolecules called adipokines, some of which regulate brain activity. The researchers took blood samples from preschool-aged children with and without ASD and compared their adipokine levels. The team examined adipokines known to be associated with ASD as well as the protein FABP4. “We previously found lower levels of FABP4 in the hair follicles of patients with schizophrenia,” explains first author Motoko Maekawa. “Although the disorders themselves are very different, we knew that FABP4 was an adipokine that can modulate brain function, especially during development.”

The researchers found that preschool-aged children with ASD had much lower levels of FABP4 in their blood than other children did, but that other adipokines did not differ between groups. A second test in two other groups of children confirmed these results. This makes FABP4 a potential early biomarker for ASD. “The identification of FABP4 as a biomarker that can detect ASD in four- to -six-year old children is good news,” says Maekawa, “especially because early diagnosis and intervention can lead to better long-term prognosis.”

Further analysis showed that the story is a little more complex. Similar comparisons in older children and in postmortem brains showed equal levels of FABP4 between ASD and non-ASD groups. This means that FABP4 levels differ during a critical period during brain development, making it more than just a biomarker. Its lack could be a factor that leads to the disease, rather than being just a byproduct.

To confirm the importance of FABP4, the researchers created knockout mice that lacked the FABP4 gene. Compared with wildtype mice, behavior testing showed that these mice interacted less with unknown mice and had more difficulty with spatial learning and memory, all reminiscent of difficulties shared by those with ASD. Additionally, when the team examined the neurons in the mouse brains, they found shape and structural characteristics that match those found in postmortem brains from people with ASD.

Looking forward, there are three questions that the researchers hope to answer. “We hope to replicate our findings in a larger group, which will allow us to determine whether specific ASD symptoms or their severity are related to low levels of FABP4,” says Maekawa. “We also hope to conduct a prospective cohort study of newborns to determine if FABP4 levels at birth can predict the future manifestation of ASD.”

Lastly, the researchers will continue studying the FABP4 mouse model of ASD to understand exactly how the FABP4 protein affects the developing brain. 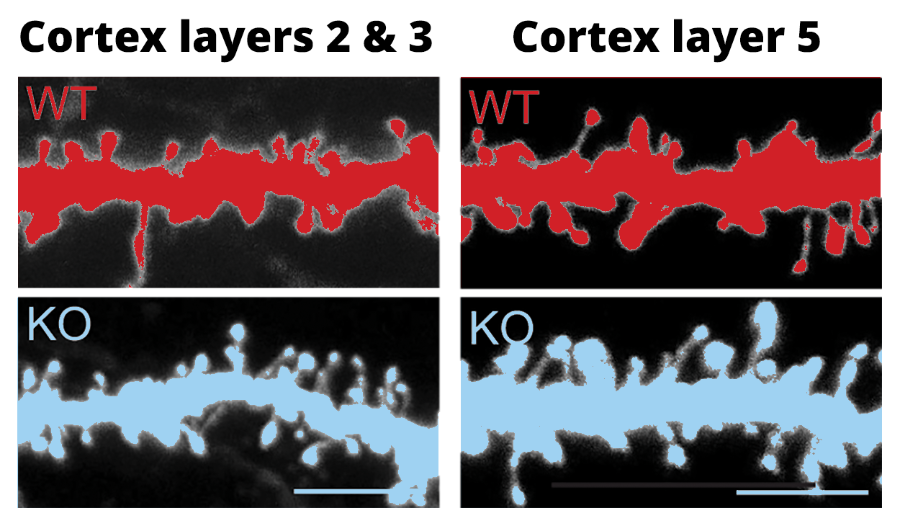 Dendritic spines of cortocal neurons in layers II and III (left) and layer V (right) in 4-week-old wildtype (top) and FABP4 KO mice (bottom). Like postmortem brains of people with autism spectrum disorders, the number and density of dendritic spines was greater in the FABP4 KO mice than in the control mice.