Can sting rays and electric rays help us map the ocean floor?

Researchers at the RIKEN Center for Biosystems Dynamics Research (BDR) in Japan have completed a feasibility study indicating that electric rays and sting rays equipped with pingers will be able to map the seabed through natural exploration.

The ocean is a big place full of natural resources including fossil fuels, minerals, and of course, fish. The problem is that many of these resources are on the ocean floor in places we have yet to find. Ocean exploration is therefore necessary, and currently automated vehicles, sonar, and satellites are all used with varying advantages and disadvantages. At RIKEN BDR, scientists led by Yo Tanaka are developing a completely different system that relies on the natural swimming behavior of electric rays and sting rays.

“Electric rays and sting rays are benthic animals, meaning that they spend most of their time swimming around the ocean floor in deep places,” explains Tanaka. “By combining simple pinger technology and digital cameras with this natural behavior, we think we can use rays to map the ocean floor, and at the same time collect meaningful data about ocean wildlife, biota, and resources.” Additionally, this method could be much more cost effective as Tanaka and his team have already shown that electric rays can use their own electricity to power the small pingers.

A pinger is a device that emits and ultrasonic sound. When a pinger’s sound is picked up by several receivers, the position of the receivers and the time when the sound is detected can be used to calculate the position of the pinger. By placing cameras on rays and linking the timing of the recorded video to the timing and locations determined by the pingers, the researchers believe they can create accurate maps of the ocean floor. In their proof-of-concept study, the team conducted two experiments that showed that their idea to use rays is feasible.

The first study took place in a large water tank. A setup with cameras in three planes—front, side, and top—verified that both types of ray swam near the bottom of the tank. The images taken by the camera allowed 3-D reconstruction of movements over time. They also verified that a camera could be attached the rays to record video of their exploration. With these positive results, the team was ready to test their system out in the real world—an area off the coast of Okinawa in Japan. As this was a proof-of-concept experiment, they chose an area with a relatively flat seabed.

They attached pingers to both sting rays and electric rays and lowered them into the ocean from a large boat along with four ultrasound receivers. The depth of the ocean was about 20 m (60 ft) and the rays were allowed to swim about 40 m (120 ft) out from the boat. The researchers recorded the pinger-derived positions as the rays swam near the boat for about two hours. Afterward, they compared the data with a seabed map of the area that already exists and confirmed that the rays’ positions were within about 10 cm of those in the public map. Similar results from both types of ray were important because rays are seasonal animals.

“In our ocean experiment, in addition to the pinger positioning, we were able to confirm that electric rays actually move around the seabed,” says Tanaka. “In the near future we will test the system for long-term monitoring.” Long-term monitoring will require pingers that the electric rays can self-charge as well as wearable battery packs for the sting rays. The next test will also monitor an area with a more varied seabed with complex geometry. 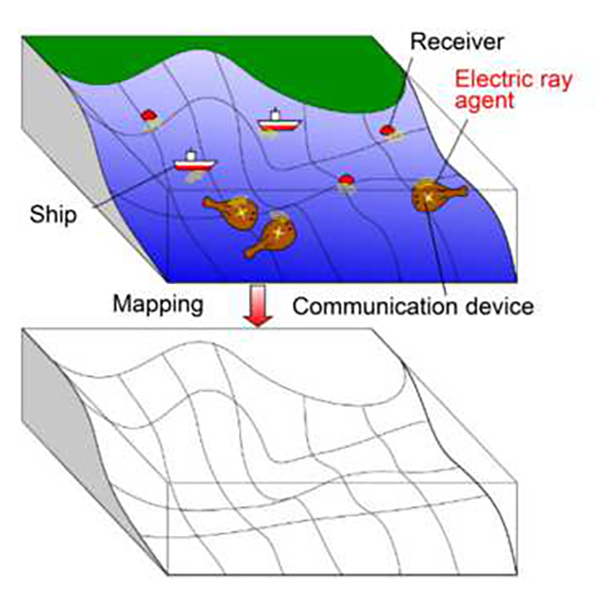 Concept for mapping the ocean floor using electric rays and sting rays.
Rays equipped with pingers transmit signals back to receivers deployed by boats. This allows the pinger position (the ray’s position) to be calculated. 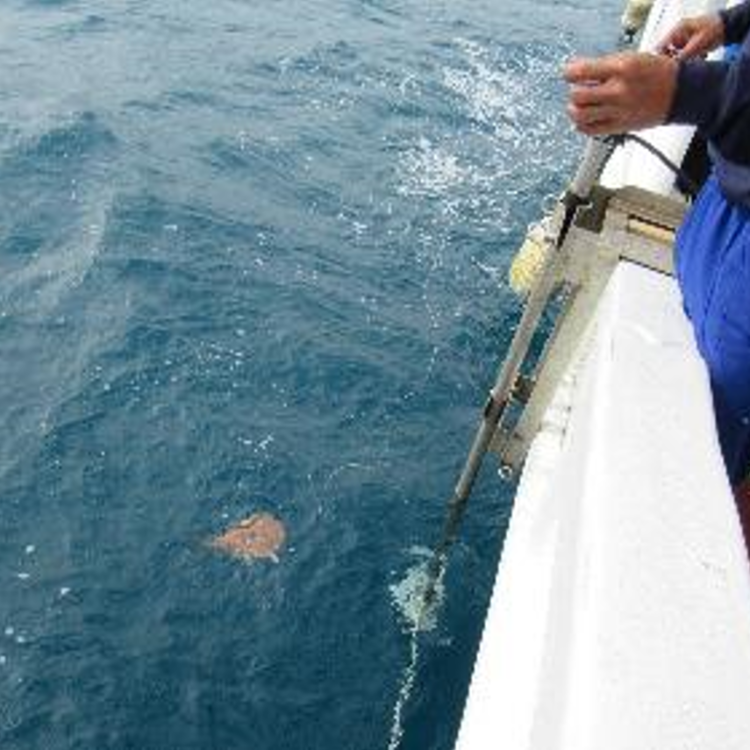 Image from the second experiment.
An electric ray just after being thrown into the sea for the test.