Alpha particles lurk at the surface of neutron-rich nuclei

Scientists from an international collaboration have found evidence of alpha particles at the surface of neutron-rich heavy nuclei, providing new insights into the structure of neutron stars, as well as the process of alpha decay.

Neutron stars are amongst the most mysterious objects in our universe. They contain extremely dense matter that is radically different from the ordinary matter surrounding us—being composed almost entirely of neutrons rather than atoms. However, in the nucleus at the center of normal atoms, matter exists at similar densities.

“Understanding the nature of matter at such extremes is important for our understanding of neutron stars, as well as the beginning, workings, and final fate of the universe,” says Junki Tanaka, one of the leaders of the study.

“Intriguingly, despite the vast difference in size and mass, the tiny atomic nuclei found on Earth and the enigmatic neutron star are actually governed by the same type of interactions,” says Zaihong Yang, also a co-corresponding author of the paper. This connection has been well established by scientists through the nuclear equation of state (EOS) which describes the relation between the density and the pressure of nuclear matter.

In the current finding, published in Science, the research team led by scientists from the RIKEN Nishina Center for Accelerator-Based Science, TU Darmstadt, and the Research Center for Nuclear Physics (RCNP) examined tin nuclei, and found evidence of “alpha clusters”—groups of two protons and two neutrons—in heavy nuclei.

For the experiments, the group examined a series of neutron-rich isotopes of tin ranging from tin 112, which has only 62 neutrons, to tin 124, which has 74 neutrons and thus has a much thicker neutron-skin. They used a method to deliberately knock out alpha particles from the nuclei by bombarding them with protons at the Research Center for Nuclear Physics (RCNP) at Osaka University, and then examined how frequently they were able to observe alpha particles in progressively heavier isotopes.

This finding has important implications for our understanding of nuclear EOS and neutron stars. In the near future, more and more accurate data on the bulk properties—mass and radius—of neutron stars will be available from electromagnetic and gravitational-wave observations.

The present work is also a key step towards a full understanding of alpha decay—a type of radioactive decay in which an atomic nucleus spontaneously emits an alpha particle. About 90 years ago, physicist George Gamow famously proposed that alpha decay takes place due to the quantum tunneling of preformed alpha particles or clusters. However, though the theory was generally accepted, it was never shown conclusively that such clusters actually existed in heavy atoms.

The finding of the current work that alpha clusters exist at the surface of heavy nuclei could provide an answer to the question about the origin of alpha particles in alpha decay. In the future, the group plans to work with high-energy accelerators such as the RI Beam Factory at RIKEN and GSI/FAIR, a new accelerator facility being built in Germany to do studies using alpha-radioactive isotopes. 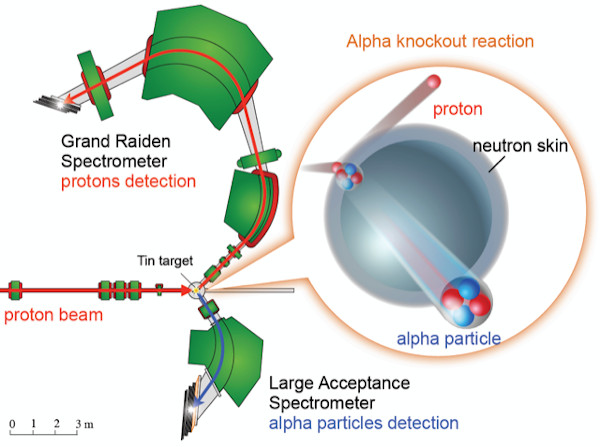