A new tool in the search for axions

Researchers from the international BASE collaboration at CERN, Switzerland, which is led by the RIKEN Fundamental Symmetries Laboratory, have discovered a new avenue to search for axions—a hypothetical particle that is one of the candidates of dark matter particles. The group, which usually performs ultra-high precision measurements of the fundamental properties of trapped antimatter, has for the first time used the ultra-sensitive superconducting single antiproton detection system of their advanced Penning trap experiment as a sensitive dark matter antenna.

If our current understanding of cosmology is correct, ordinary “visible” matter only makes up 5 percent of the total energy content of the universe. Another 26 percent is believed to be a mysterious substance called “cold dark matter”. Because this hypothetical “dark matter” does not interact strongly with ordinary matter, it is extremely hard to detect, and as a result its exact microscopic properties have yet to be understood. One possibility is that “dark matter” is a new type of particle, called an axion. In fact, there are a number of global physics programs hunting for dark matter “axions” or “axion-like particles” using very different types of detectors.

If axions and axion-like dark matter particles (ALPs) exist, they oscillate through the galaxy at characteristic frequencies defined by their masses. In strong magnetic fields, such as those present in Penning trap experiments, the particles might convert into electromagnetically interacting photons. Like a musician hitting a string of their instrument, the converted ALPs would then excite the detection resonators of the sensitive single particle detectors causing them to reverberate, allowing the induced dark matter “sound” to be detected.

Thanks to the ultra-high sensitivity of the single-antiproton detectors used in the BASE experiment, the researchers were able to set new laboratory limits on the coupling of axion-like particles and photons. Though no ALP-induced signal was detected, the axion-to-photon coupling limits which were reached were similar to the limits derived from astrophysical searches and constitute, in a narrow mass range, the best laboratory limits derived so far. The combination of Penning-trap and single particle detection methods furthermore enables detector noise-level calibration by single-particle quantum thermometry, an elegant method that can provide model-independent calibration of coupling limits. In addition, this newly discovered avenue of using precision Penning trap experiments as axion detectors has the potential to be extended to other trap experiments, and to derive axion-photon coupling limits in much broader mass ranges. According to Stefan Ulmer, who heads the Fundamental Symmetries Laboratory, “With a purpose built-experiment, combining the already available technologies with higher magnetic fields, and lower detector temperatures, we are optimistic that we will be able to improve the limits by at least a factor of 100, and with ongoing developments, we may be able to improve the current detection bandwidth by at least a factor of 3,000.”

The work, published today in Physical Review Letters, was carried out by members of the BASE collaboration. BASE consists of scientists from RIKEN Fundamental Symmetries Laboratory, the European Center for Nuclear Research (CERN), the Max Planck Institute for Nuclear Physics in Heidelberg, the Johannes Gutenberg University Mainz (JGU), the Helmholtz Institute Mainz (HIM), the University of Tokyo, the GSI Darmstadt, the Leibniz University Hannover, and the Physikalisch-Technische Bundesanstalt (PTB) Braunschweig. The research was performed as part of the work of the Max Planck-RIKEN-PTB Center for Time, Constants and Fundamental Symmetries, an international group established to develop high-precision measurements to better understand the physics of our Universe. 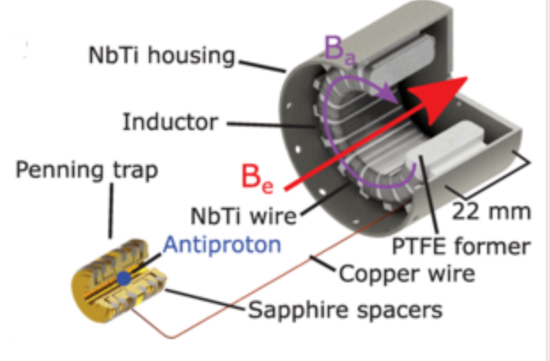