Researchers at the RIKEN Cluster for Pioneering Research (CPR) in Japan report that Kleefstra syndrome, a genetic disorder that leads to intellectual disability, can be reversed after birth in a mouse model of the disease. Published in the scientific journal iScience, the series of experiments led by Yoichi Shinkai showed that postnatal treatment resulted in improved symptoms, both in the brain and in behavior.

Normally, we get two good copies of most genes, one from each parent. In Kleefstra syndrome, one copy of the EHMT1 gene is mutated or missing. This leads to half the normal amount of GLP, a protein whose job is to control genes related to brain development through a process called H3K9 methylation. Without enough GLP, H3K9 methylation is also reduced, and the connections between neurons in the brain do not develop normally. The result is intellectual disability and autistic-like symptoms. “We still don’t know if Kleefstra syndrome is a curable disease after birth or how this epigenetic dysregulation leads to the neurological disorder,” says Shinkai. “Our studies in mice have provided new information about what causes the behavioral abnormalities associated with the syndrome and have shown that a cure is a real possibility in the future.”

Reasoning that extra GLP might be an effective treatment, the researchers performed a series of experiments in mice that were engineered to have only one good copy of the EHMT1 gene. The brains of these mice show characteristics of the human condition, including 40% less GLP and 30% less H3K9 methylation. The mice also display several behaviors seen in humans with Kleefstra syndrome, such as reduced locomotion and greater anxiety. After each experiment, the researchers measured these factors and compared them to normal mice to see if the treatment had been effective.

The researchers artificially induced GLP production after birth in two experiments, once throughout the whole brain and once specific to adult neurons in the brain. Treatment in 3- to 4-week-old juvenile mice quickly rescued GLP and H3K9 methylation levels in the brain in both tests. Behavior improved several weeks later, but only when GLP was increased throughout the whole brain. Thus, brain and behavioral symptoms were successfully rescued by treatment that increased GLP levels throughout the brain after mice had already become juveniles.

The researchers next wanted to know why their treatment only fully worked when GLP was increased throughout the brain, not just in neurons. Thinking that perhaps the disorder abnormally activates microglia cells in the brain, which are known to control immune responses such as inflammation, the team searched and found a well-known inflammatory response in the brains of the model mice, along with greater amounts of activated microglial cells. Knocking out a key protein involved in the inflammatory response reversed some of the brain abnormalities caused by inflammation but did not change the behavior. “This means that brain inflammation is only part of the story,” explains first author Ayumi Yamada. “To have a complete understanding of the disease, we need to find out what happens in other non-neural cells when we increase GLP.”

As this is the first report of neuro-inflammation in Kleefstra syndrome, the next step is to find out if it also occurs in the human condition. Shinkai believes the chances are high and says he would not be surprised if other neurological diseases caused by epigenetic dysregulation were also related to abnormal inflammation in the brain. “Although we don’t yet know if our findings will be applicable to patients with Kleefstra syndrome,” he says, “we have shown that a cure after birth is possible and believe this will bring hope to patients and their families.” 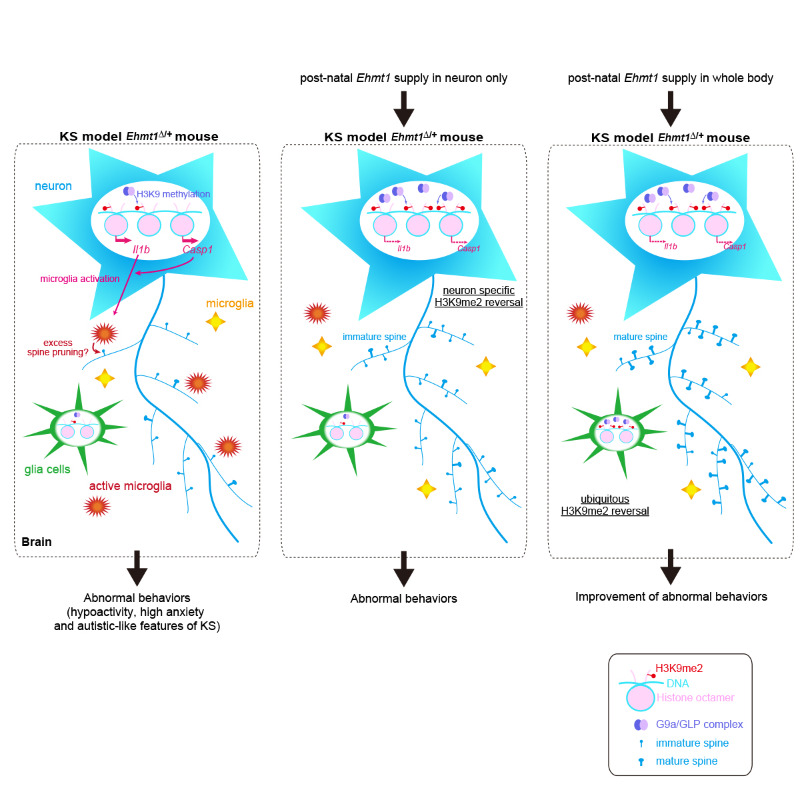