New research from the RIKEN Center for Brain Science shows that mice can teach us about decision-making strategies. Mice in the study autonomously trained themselves to make decisions about detailed pictures on a screen. A dataset of over 1.3 million viewings of black and white striped lines revealed that mice were highly sensitive to small differences in how slanted the lines were. This sensitivity allowed fine visual discriminations, which illuminated the underlying, sometimes random nature of the decisions. The study was published in the Proceedings of the National Academy of Sciences on July 27.

Brain scientists are interested in why choices vary: is it purely perceptual differences in what we’re looking at and deciding between, is there some fuzzy computation in the brain, or are we perhaps just tired? With a well-designed experiment, scientists can ‘ask’ mice these questions, just by analyzing their choices and behavior. The RIKEN CBS team from Andrea Benucci’s lab did this by using a computer-controlled system that shows mice two varying pictures of striped lines side by side on a computer screen. Mice can get a reward by rotating a tiny steering wheel with their paws to indicate which of the two pictures has lines that are more vertical, or at other times, more horizontal.

On average, mice could tell two images apart if the angle of the line gratings differed by as little as 9 degrees, which is better acuity than mice are typically thought to have. An exceptionally skilled mouse could discriminate a difference of just 6 degrees. The experiment also demonstrated that mice can train themselves on this task without needing to compare the lines to an ‘absolute’ vertical or horizontal example. But beyond visual skills, the researchers were interested in the strategies used by mice to make their choices.

“We can describe how an ‘ideal’ mouse would behave, just based on the difficulty of each trial, or how closely oriented the two gratings are,” says Benucci, the senior author of the study. “But mice, just like humans, make judgements using more than just visual information.” The team built a model to describe these judgements that incorporated what mice had previously viewed in the task as well as their reaction times. When a mouse reacted too impulsively, spinning the wheel as soon as the stimuli appeared without paying much attention to them, an analysis of its decisions revealed that they were heavily influenced by what the mouse had seen in previous trials. Some animals relied more on only one of the two images on the screen to make their decisions. Overall, though, mice were strategic, performing just well enough to get the water that they wanted.

“What we’re seeing are individual choices that go beyond just visual estimation,” says first author Dmitry Lyamzin, a researcher at RIKEN CBS. “These choices show non-perceptual biases, and are similar to what is found in human studies in which people’s decisions are unconsciously affected by what they have already seen and by their previous choices.”

Researchers want to know the circumstances and the biology that lead people to use this type of strategy. This first study using the new task has already provided some clues. Benucci and his team analyzed the mouse data in more detail and found that mouse strategies changed depending on how focused the mice were able to be. “We show that variations in available cognitive resources, which can be gauged by how impulsive or engaged the animal is on any given trial, directly correlates with how prone the animals are to falling back on their habitual, history-dependent strategies,” says Benucci. “From here on, we can use powerful experimental tools available in mice, and examine the neural circuits involved in sensory-to-decision transformations and that regulate individual strategies and attention-dependent variability in task performance.” 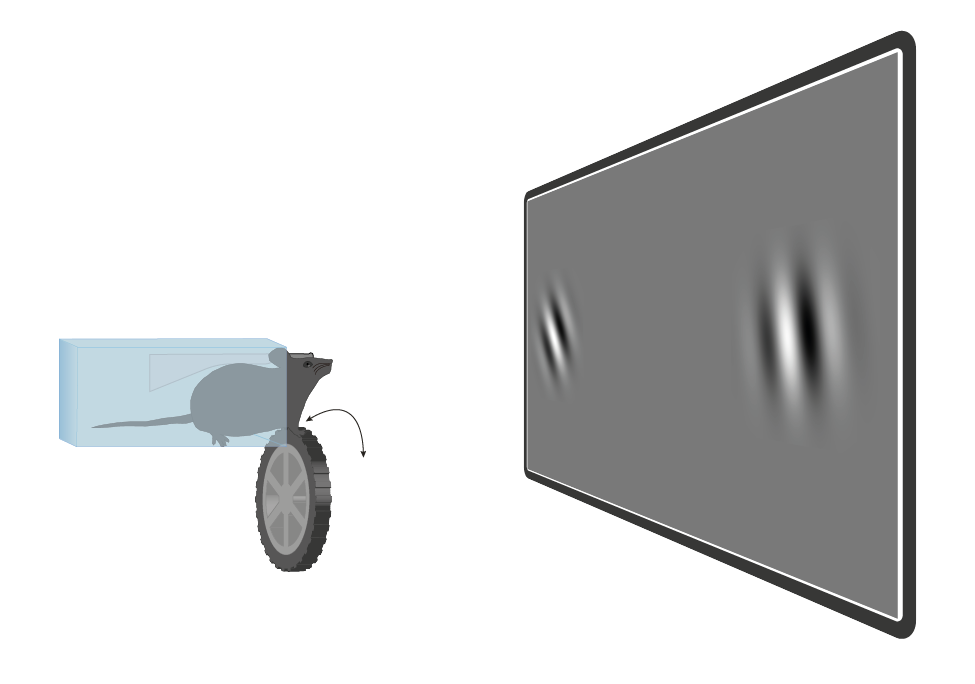 Schematic of the decision setup
Mice autonomously trained themselves to make decisions about detailed pictures on a screen by spinning a wheel with their paws. As with humans, their decisions often depended on their past decisions, especially when they were not concentrating as much.