An international research group at the RIKEN Cluster for Pioneering Research (CPR) has successfully treated cancer in mice using metal catalysts that assemble anticancer drugs together inside the body. Published in the scientific journal Nature Communications, the study is the first report of therapeutic in vivo synthetic chemistry being used to make anticancer substances where they are needed simply by injecting their ingredients through a vein. Because this technique avoids indiscriminate tissue damage, it is expected to have a significant impact on cancer treatment.

Aside from effectiveness at killing cancer cells, a major challenge to cancer chemotherapy is how to mitigate the toxic side effects on the body. Drugs that can damage cancer cells can damage non-cancerous cells as well, and the negative side effects of chemotherapy can cause permanent and debilitating damage. Current methods for reducing these side effects include selective delivery of anticancer drugs to cancer tissue (drug delivery) and conversion of non-toxic compounds (prodrugs) into toxic compounds nearby the cancerous tissue.

Katsunori Tanaka at RIKEN CPR, who led the new study, has developed a method for activating prodrugs using transition-metal catalysis inside the body. When the catalyst is injected into an organism, it usually has no effect because it is destroyed by antioxidants such as glutathione. By placing the transition-metal catalysts inside special pockets within a protein, Tanaka and his colleagues have been able to avoid this problem and stabilize the catalytic function in vivo, thus ensuring that the chemical reaction can proceed efficiently in the body. For this technique to work, the catalyst needs to selectively find its way to the cancer. As in their previous studies, the team targeted the catalyst to the cancer by attaching chains of cancer-binding sugar molecules to the surface of the carrier protein. Using these techniques, Tanaka’s group succeeded in inhibiting cancer growth and metastasis, as well as reducing the side effects. The new study is a proof of concept in which cancer in mice was treated by actually assembling anticancer drugs inside the body near the cancer cells. “In the past, we used similar methods to attach anticancer drugs to tumors,” says Tanaka, “but here, we were able to avoid putting any toxic drugs into the body at all.”

Noting that the basic skeleton of most anticancer drugs contains a benzene ring, the researchers started by making benzene rings inside the body using transition-metal catalysts. “No one believed that artificially synthesizing benzene rings inside the body was possible, but I was confident that we could do it based on our previous achievements,” says Tanaka. Using a transition metal-catalyzed complex designed for selective delivery to cancerous tissues, they succeeded in efficiently creating the benzene-rings needed by cancer drugs in the vicinity of cancer cells. By using non-toxic substances, and only joining them together to form active anticancer drugs at the tumor site, they saw a 1000-times increase in the cancer-inhibiting activity of the drugs. Simply administering the ingredients needed for the drug, along with the transition-metal catalyst, through a vein, cancer growth was inhibited without side effects such as weight loss.

This is the first time that active anticancer drugs have been assembled on-site and effectively combatted cancer by simply injecting the ingredients for the drug through a vein. In addition to benzene, the methodology developed in this study is expected to enable a variety of other molecules to be synthesized inside the body. The hope is that this type of chemotherapy will become a useful therapeutic platform for the future of cancer treatment.

“Many patients with cancer are dying because of the side effects of treatment. We believe our technology, which attacks cancer cells highly effectively without side effects, will be able to save lives,” says Tanaka. “The method will also allow us to reconsider using compounds that have not been used before because they were too toxic when delivered to the whole body. Now they can be synthesized at the tumor site without affecting healthy tissue. We believe this is a paradigm shift for pharmaceuticals and drug discovery.” 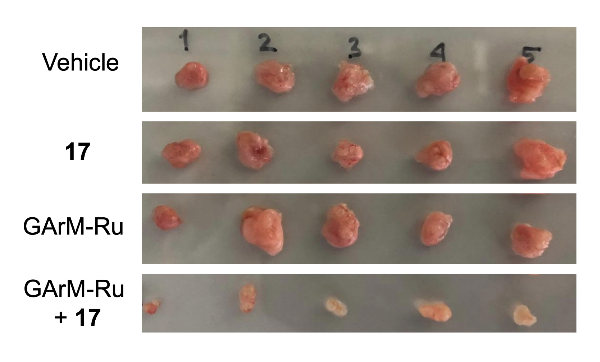 Extraction and visual comparison of tumour tissues
By administering the ingredients for the drug, along with the transition-metal catalyst, cancer growth was inhibited (bottom)