Researchers led by Michiko Mandai at the RIKEN Center for Biosystems Dynamics Research (BDR) in Japan have used a genetic modification to improve human-derived retina transplants grown in the lab. After transplant into damaged rat retinas, timed removal of certain cells from the grafts allowed better connections to host retinas, which resulted in more responsiveness to light in the damaged eyes. Because the retinal sheets were generated from stem cells of human origin, this represents one of the final steps necessary before this technique can be tested in human clinical trials for repairing retinal degeneration. The study was published in the scientific journal iScience.

Retinitis pigmentosa is a hereditary disease in which photoreceptors in the retina die, leaving people with complete loss of vision or progressive loss in certain spots. One promising therapy is to replace the part of the retina at the back of the eye with a new retinal sheet, including the photoreceptors, grown from stem cells. For this regenerative cell therapy to work, the new light receptors in the graft must connect to neurons in the host retina, allowing light from the outside world to be relayed to the brain, which is how we see.

The researchers targeted ISLET1, a gene necessary for maturation of bipolar cells that connect to photoreceptors. They began with a line of human stem cells and made clones that lacked the ISLET1 gene. Then, they grew retinal organoid sheets from these clones. Early on, these retinal sheets developed the same way as those grown from normal stem cells. All the different retinal cell types, particularly the photoreceptors, were present and organized in the correct way. As hoped, the targeted bipolar cells eventually died off, which is what happens when they are not allowed to mature.

With this success, the researchers tested their theory by transplanting the new type of retinal sheet into degenerated rat retinas that lacked almost all photoreceptors. A variety of tests showed that the photoreceptors in the retinal sheet matured properly after transplantation, and compared with normal retinal sheets, made better contact with the host eye. To test whether this actually led to better responses to light, the team recorded from retinal ganglion cells, which form the optic nerve and relay visual information from bipolar cells to the brain. Thus, good responses here would mean that more photoreceptors in the graft sheet were connected. As predicted, the response to light was better in these ganglion cells than in those that received a normal retinal sheet transplant.

“The genetic modification in human stem-cell derived retinas showed a substantial functional improvement compared with the wild-type graft retinas,” says Mandai. “Additionally, we were able to make detailed observations of host-graft synapse formation in the absence of graft bipolar cells, which was difficult to do before.”

While the group has previously reported similar results using rat stem cells, Mandai says that applying this technique to human cells is a significant milestone. “We can now move forward to applying this strategy in clinical studies,” she says. “We expect it will improve clinical outcomes and be useful in general for stem-cell based therapies targeting retinal degeneration.” 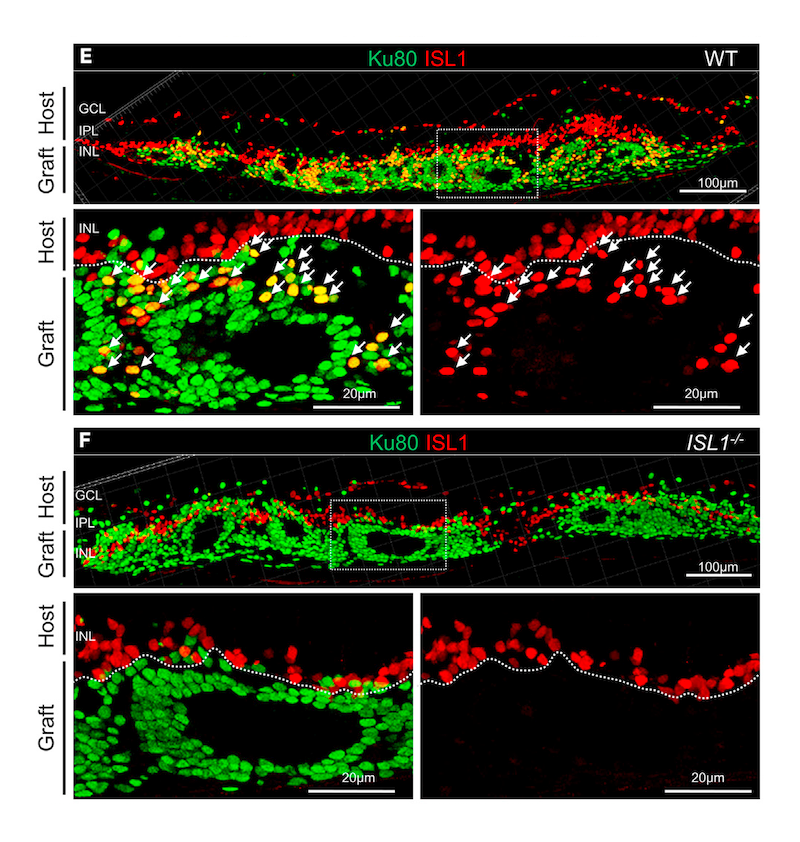 A view of the retina after transplanting a retinal sheet grown from normal human stem cells (top) or the modified stem cells lacking the ISLET1 gene (bottom). Bipolar cells are red. Looking at the bottom right image of each panel, we can see that the new type of retinal sheet lacks bipolar cells. This allows transplanted photoreceptors to connect better with host bipolar cells.