Death in darkness: a new type of cell death discovered in fly guts

A research group led by Sa Kan Yoo at the RIKEN Center for Biosystems Dynamics Research (BDR) has discovered a completely unknown type of cell death that takes place in the guts of the common fruit fly. The new process, coined “erebosis” by the researchers is thought to play a role in gut metabolism. The findings necessitate a revision of the conventional concept of cell death, and at the same time, overturn the previously established theory of tissue homeostasis in the gut. The study was published April 25 in scientific journal PLOS Biology.

Like the skin, cells that make up the intestines are constantly dying and being replaced by new cells. This process, called turnover, helps maintain the balance, or homeostasis, between tissue growth and tissue renewal. The conventional theory for turnover in the intestines is that aging or damaged cells die through a process called apoptosis. Also called “programmed cell death”, apoptosis is one of three types of cell death that are currently recognized. The new research calls this assumption into question, providing evidence for a second type of programmed cell death that could be specific to the intestines.

As is often the case, this discovery occurred by accident. The researchers were studying a fruit fly version of ANCE, an enzyme that helps lower blood pressure. They noticed that Ance expression in the fly gut was patchy, and that the cells that contained it had strange characteristics. “We found that Ance labels some weird cells in the fruit fly gut,” says Yoo. “But it took a long time for us to figure out that these weird cells were actually dying.” They found that the strange cells were dark, lacking nuclear membranes, mitochondria, and cytoskeletons, and sometimes even DNA and other cellular items that are needed for cells to stay alive.

The process was so gradual and unlike the more sudden and explosive cell death seen in apoptosis, that they realized it might be something new. Because the Ance-positive cells were often near where new cells are born in the gut, they theorized that the new type of cell death is related to turnover in the intestines. They tentatively named the process erebosis, based on the Greek ‘erebos’ meaning ‘darkness’, because the dying cells looked so dark under the microscope.

To prove erebosis is a new type of cell death, the researchers conducted several tests. First, experimentally stopping apoptosis did not prevent gut homeostasis. This meant that cell turnover in the gut, including cell death, can proceed without apoptosis. Second, the dying cells did not show any of the molecular markers for apoptosis or the other two types of known cell death. Cells in late-stage erebosis did show a general marker for cell death related to degraded DNA.

Detailed examination of the cells in which erebosis was occurring revealed that they were located near clusters of gut stem cells. This is good evidence erebotic cells are replaced by newly differentiated gut cells during turnover. Ironically, the enzyme that led to this discovery does not seem to be directly involved in the process, as knocking down or overexpressing Ance did not affect turnover or erebosis. Therefore, the next step is work out the detailed molecular events that allow erebosis and cell turnover in the fly gut.

“I feel our results have the potential to be a seminal finding. Personally, this work is the most groundbreaking research I have ever done in my life.” says Yoo, “We are keenly interested in whether erebosis exists in the human gut as well as in fruit flies.” 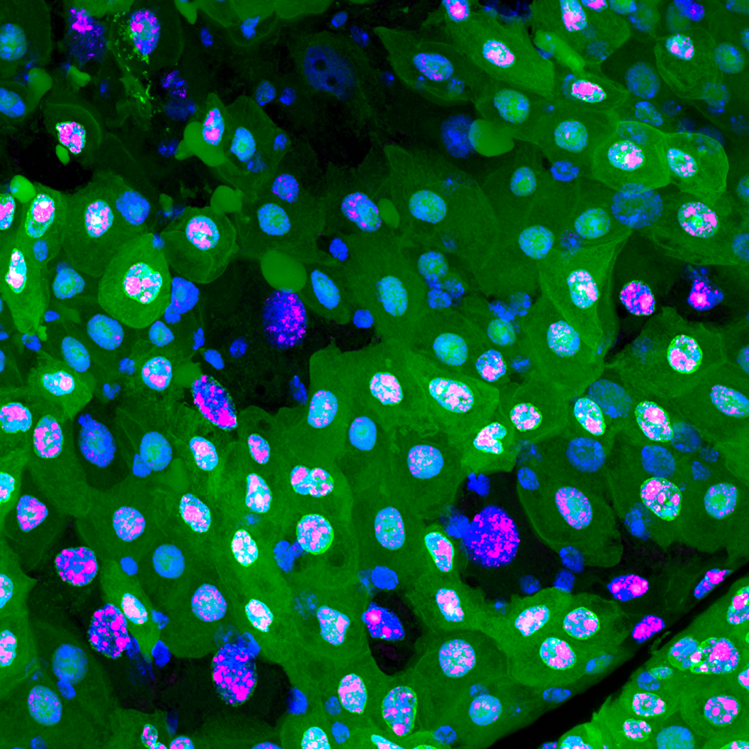 Gut cells at different stages of erebosis.
During erebosis, fluorescent proteins such as GFP and RFP become lost, making cells “black”. In the beginning of erebosis, cells lose cytoplasmic GFP (left bottom cells). Then, erebotic cells lose nuclear GFP (a cell in the center) and nuclear RFP (a cell at the top center).