The Evolutionary Morphology Laboratory led by Shigeru Kuratani at the RIKEN Cluster for Pioneering Research (CPR) in Japan, along with collaborators has found evidence that the mysterious ancient fish-like vertebrate Palaeospondylus was likely one of the earliest ancestors of four-limbed animals, including humans. Published May 25 in the scientific journal Nature, the study unmasks this strange animal from the deep past and sets its position on the evolutionary tree.

Palaeospondylus was a small fish-like vertebrate, about 5 cm long, which had an eel-like body and lived in the Devonian period about 390 million years ago. Although fossils are abundant, its small size and the poor quality of cranial reconstructions—by both CT scan and wax models—have made placing it on the evolutionary tree difficult ever since its discovery in 1890. It’s been thought to share features with both jawed and jawless fish and its body has presented evolutionary scientists as a mystery. Among several unusual features, the most perplexing is the lack of teeth or dermal bones in the fossil record.

To resolve some of these issues, the researchers used the extremely powerful RIKEN SPring-8 synchrotron to generate high-resolution micro-CT scans using synchrotron radiation X-rays. Additionally, unlike most studies that have used excavated fossil heads, the new study used carefully selected fossils in which the heads remained completely embedded in the rock. “Choosing the best specimens for the micro-CT scans and carefully trimming away the rock surrounding the fossilized skull allowed us to improve the resolution of the scans,” says lead author Tatsuya Hirasawa. “Although not quite cutting-edge technology, these preparations were certainly keys to our achievement.”

The high-resolution scans revealed several important features. First, researchers found three semi-circular canals, clearly indicating an inner-ear morphology of jawed vertebrates. This resolved an issue because previous studies suggested that Palaeospondylus was related to primitive jawless vertebrates. Next, they found key cranial features that place Palaeospondylus into the tetrapodomorph category, which is made from tetrapods—four-limbed animals—and their closest ancient relatives. Several analyses showed that Palaeospondylus was more closely related to limbed tetrapods than to many other known tetrapodomorphs that still retained fins.

However, unlike tetrapodomorphs in general, teeth, dermal bones, and paired appendages have never been associated with Palaeospondylus fossils, although these features are readily found in fossils of other animals that lived around the same time and in the same place in the Achanarras fish bed in Scotland. The lack of these features can be explained by the splitting of a set of developmental features, resulting in a larval-like body. “Whether these features were evolutionarily lost or whether normal development froze half-way in fossils might never be known,” says Hirasawa. “Nevertheless, this heterochronic evolution might have facilitated the development of new features like limbs.”

Kuratani and his research group do not limit their study of early vertebrate evolution to the fossil record. They also use molecular biology and genetics to study developing embryos of key modern vertebrates. “The strange morphology of Palaeospondylus, which is comparable to that of tetrapod larvae, is very interesting from a developmental genetic point of view,” says Hirasawa. “Taking this into consideration, we will continue to study the developmental genetics that brought about this and other morphological changes that occurred at the water-to-land transition in vertebrate history.” 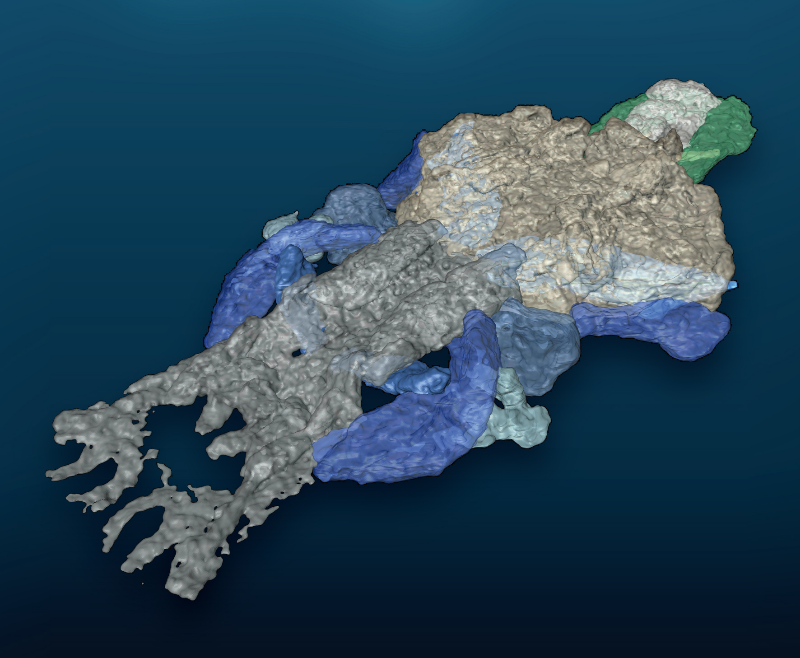