Ethanol can help plants survive in times of drought says a new study conducted at the RIKEN Center for Sustainable Resource Science in Japan. Led by Motoaki Seki, researchers show that adding ethanol to soil allows plants, including rice and wheat, to thrive after two weeks without any water. As ethanol is safe, cheap, and widely available, this finding offers a practical way to increase food production all over the world when water is scarce, without the need for costly, time-consuming, and sometimes controversial production of genetically modified plants.

The foreseeable future includes a steadily rising population and climate change-induced increases in water shortages, two conditions that will inevitably lead to food shortages unless action is taken. One option is to find a way to prevent plants from dying when they don’t have access to water. Genetically modifying plants so that their stomata—the pores in their leaves—stay closed, has been somewhat effective because it prevents water from leaving the plants. However, making genetically modified plants is expensive and time consuming, and countries with the greatest need might not have equal access to these modified crops.

Seki and his team have been working on another approach. Knowing that plants produce ethanol when deprived of water, they reasoned that giving it to plants would protect them from future drought. To test this hypothesis, they grew plants for about two weeks with ample water. Then, they pretreated soil with ethanol for three days, followed by water deprivation for two weeks. About 75% of ethanol-treated wheat and rice plants survived after rewatering, while less than 5% of the untreated plants survived.

Having shown that ethanol can protect these two important crops from drought, they next set out to explain why by focusing on the model plant Arabidopsis. First, they looked at the leaves. They found that soon after ethanol-treated Arabidopsis plants were deprived of water, their stomata closed and leaf temperature went up. By 11 and 12 days of water deprivation, these plants had retained more water in their leaves than the untreated plants.

Then, the researchers analyzed gene expression before and during water deprivation and radio-tagged the ethanol before pretreatment. This allowed them to see what processes were activated during drought and what happened to the ethanol after it was taken up by the plant roots. Even before water was deprived, the ethanol-treated plants began to express genes that are normally expressed during water deprivation. Additionally, around the same time that water content was dropping in untreated leaves, the ethanol-treated plants were making sugars from the ethanol and doing photosynthesis.

Seki says that treating the soil with ethanol mitigates drought on several fronts. First, drought-related genes are expressed even before water is missing, giving the plants a head start in preparation. Then, the stomata close, allowing leaves to retain more water. At the same time, some of the ethanol is used to make a variety of sugars, which provide much needed energy that is normally difficult to get with closed stomata.

“We find that treating common crops such as wheat and rice with exogenous ethanol can increase crop production during drought. As in Arabidopsis, this is likely via changes in the metabolomic and transcriptomic profiles that regulate the drought-stress response,” says Seki. “This offers us a cheap and easy way to increase crop yield even when water is limited, without the need for genetic modification.” 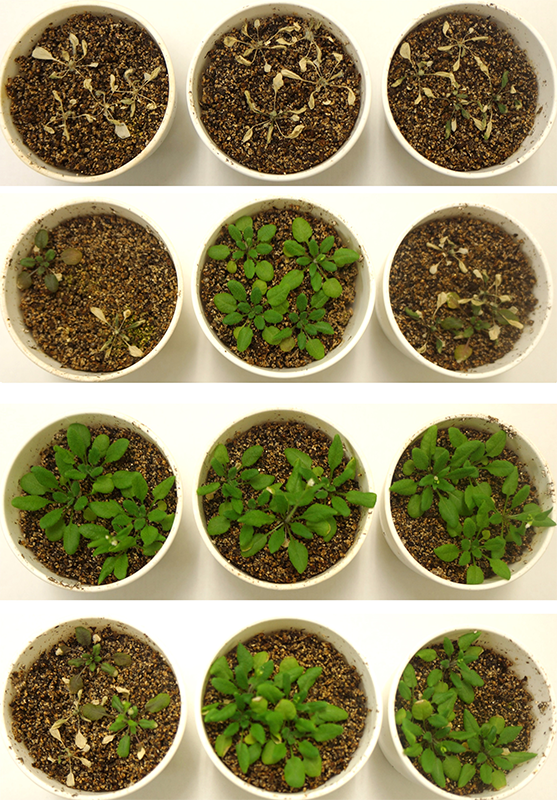 Arabidopsis after 2 weeks without water and with soil pretreated with (top to bottom) water only, 5, 10, and 15 mM of ethanol. 10 mM proved the most effective. 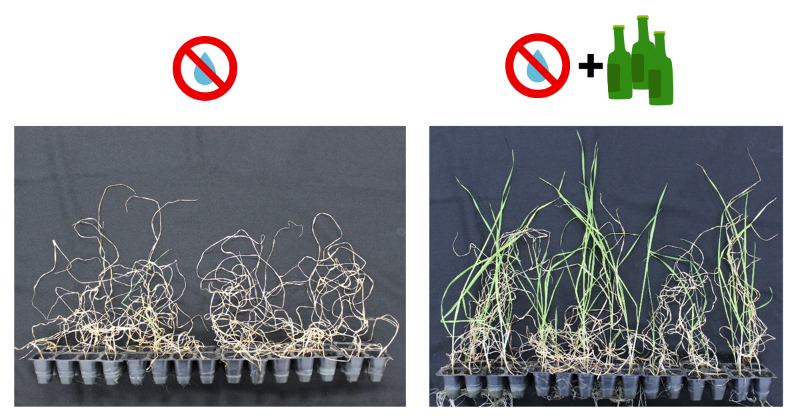