How an embryo stops being an egg

‘Eggness’ genes get switched off in early development 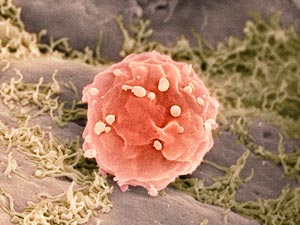 Egg cells are remarkably malleable on a molecular level. But after an egg is fertilized and becomes a single-celled zygote, its ‘eggness’ is nullified, as the genes that make an egg an egg are suddenly switched off. These genes only turn on again at a later gestation stage, when the embryo is ready to make its own primordial egg or sperm cells (collectively known as germ cells).

The molecular determinants of this on-again, off-again regulation of germ cell development have long befuddled biologists. Now, however, a team led by researchers at the RIKEN Center for Integrative Medical Sciences has identified the repressor of germ cell genes in mouse embryonic stem cells1.

The same suppressing pathway is likely to be at play in early embryo development as well. In addition to offering a crucial missing piece of the early development puzzle, the results have potential clinical applications. “The findings of this study could contribute to a better understanding of the mechanisms underlying infertility, which may lead to new kinds of treatments,” says Haruhiko Koseki, who led the research.

Koseki did not set out to investigate the regulation of germ cell genes. He was studying a type of developmental gene silencer known as a Polycomb group protein, when he noticed that one such protein — PCGF6 — and its associated complex bound to the gene-activating promoter region of germ cell-related genes in mouse embryonic stem cells, turning them off. In stem cells that lacked a working version of PCGF6, however, no such dialling down of gene expression occurred.

Koseki and his colleagues then worked out how this PCGF6-associated complex recruits another factor called RING1B to alter the way the DNA is coiled at these bound sites, which helps to explain why the genes were silenced.

While Polycomb-related complexes usually recognize their target genes in a fairly generic fashion, Koseki’s team documented how PCGF6 is specifically recruited to the germ cell genes by a pair of guide proteins that recognize particular stretches of DNA.

“This suggests Polycomb proteins may use several mechanisms to bind their targets,” says Koseki. If correct, that leaves much unchartered biology to explore.

Although the study was in mouse cells, Koseki suspects similar processes are at play in human embryonic stem cells and in human early embryos as well. Thus, some women may have trouble conceiving because their egg cells fail to stop expressing their germ cell genes after fertilization.