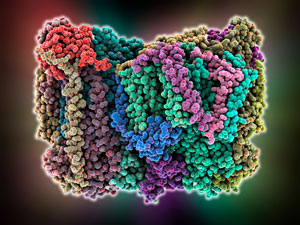 The molecular machinery of respiration that cells use to generate energy operates like a tiny biological engine. Just like an automobile engine needs the precisely timed opening and closing of valves to admit air and fuel into the cylinders prior to ignition, an enzyme of cellular respiration relies on the perfectly choreographed opening and closing of water channels, research by RIKEN has shown1.

Respiration is the process by which cells react glucose or related organic molecules with molecular oxygen to release energy. Nature separates respiration into several steps, which are controlled by different enzymes. Now, Hideo Ago at the RIKEN SPring-8 Center and his collaborators have revealed the intricate mechanistic details of one of those enzymes—the ‘terminal oxidase’ enzyme of cellular respiration, cytochrome c oxidase (CcO; Fig. 1).

In nature, CcO draws in molecular oxygen and reacts it with protons in a process known as oxygen reduction. In their experiment, the researchers replaced oxygen with carbon monoxide. Carbon monoxide behaves just like molecular oxygen in the active site of CcO, but it has the advantage that it can be driven from the enzyme’s active site by a laser pulse. “A laser pulse alters CcO’s structure from its bound form to its unbound form,” Ago explains. 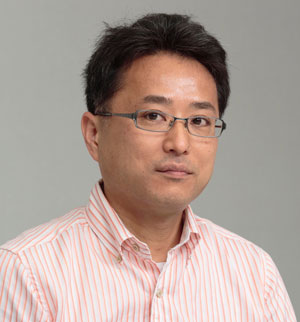 The team used femtosecond (10−15 second) pulses of x-rays produced by an x-ray free-electron laser to capture detailed snapshots of the enzyme as it cycled through these steps in the catalytic cycle. In the first step, the protons that are used to reduce oxygen are pumped into a storage site in the active site via a water channel. Filling of the proton storage site induces a conformational shift at a copper ion in CcO’s active site, which increases its affinity for molecular oxygen. The subsequent binding of oxygen by the copper induces a second conformational change that shuts off the water channel through which protons are pumped in, preventing any proton backflow. The channel remains shut as the oxygen migrates to a neighboring iron ion where reduction with the protons occurs.

“The use of ultrashort, very bright x-ray pulses makes it possible to obtain images of the crystal from single pulses, which enables a higher time resolution than other crystallographic techniques,” says Ago. The sharp snapshots captured by the researchers allowed them to observe the fine details of the structural changes of CcO.

The next step will be to track these changes with molecular oxygen rather than carbon monoxide, Ago says.