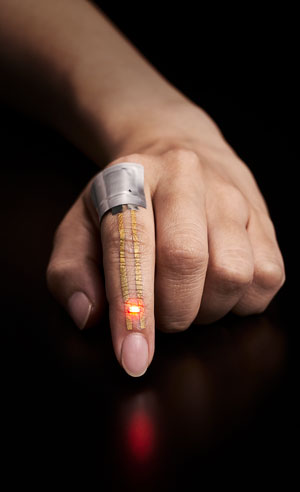 Figure 1: A flexible, breathable conductor can be applied directly to the fingertips to power up wireless touch sensors. © 2017 RIKEN Center for Emergent Matter Science

Gold meshes developed by a RIKEN-led team can be attached to the skin for several days without triggering dermatitis1. These devices promise to boost both patient comfort as well as the accuracy of clinical diagnostics.

Replacing the clunky cables associated with conventional electronic medical devices with wearable, wireless-enabled patches is a long-standing goal in medical diagnostics. To realize this, on-skin electronics capable of conforming to the body’s curved surfaces under a range of motions while remaining conductive need to be developed. Most demonstrations of this technology have used soft, stretchy silicone or organic polymers as substrates, but these kinds of films have tightly knit chemical structures that can trap humidity and microorganisms beneath them.

Takao Someya from the RIKEN Center for Emergent Matter Science is well aware of the challenges of integrating electronics with human bodies. In 2013, he and his colleagues developed an ultra-lightweight, nearly unbreakable wearable plastic that could be imprinted with organic transistors. “However, this sensor blocked airflow around the skin and caused irritation during long-term use due to its lack of breathability,” Someya recalls.

To solve this problem, Someya and co-workers decided to eliminate the backing substrate. They spun a polymer made from biocompatible polyvinyl alcohol into nanometer-thin, spaghetti-like strands and overlaid them in a mesh pattern. The team then deposited a thin gold coating onto the nanomesh plastic.

The device can be applied to the skin by simply spraying with water. This dissolves away the polymer, leaving behind a metal pattern that coats complex surfaces, such as fingerprint ridges, with ease.

The researchers anticipated that the porous, gas-permeable nature of the nanomeshes would lead to increased airflow and breathability, and clinical studies confirmed this to be the case. After a one-week study of volunteers wearing flexible conductive patches on their forearms, a dermatologist found significantly less skin inflammation with the laminated metal than conventional polymers, and participants reported forgetting the sensors were even attached.

Mechanical and electrical tests revealed the nanomeshes were durable enough for use as wireless touch sensors, even after hundreds of bending cycles. Their setup, which places the mesh conductor onto the fingertips (Fig. 1) and runs conductive patterns back to a wrist-held wireless module, uses changes in electrical resistance to spot when the skin touches an object. The researchers applied the same principle to produce temperature and pressure sensors and to fabricate electrodes for electromyography diagnostics.

“This sensor makes it possible to measure biological information without stress or discomfort, which may make it useful in fields from sports to medical care,” says Someya.