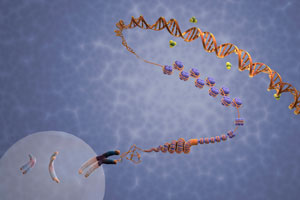 The way in which a cell’s machinery goes straight from replicating DNA to adorning the newly synthesized DNA with chemical tags has been discovered by a team co-led by RIKEN researchers1. Unexpectedly, they have implicated a protein previously thought to be involved only in DNA replication in the process. This discovery could help scientists find new drugs for cancer.

Cells use small chemical tags—methyl groups—in the genome to lock genes in the “off” position (Fig. 1). During replication of DNA, these tags must be copied from the original strands of the double helix to their new copies. Aberrations in the patterning of these tags have been implicated in many forms of cancer.

The researchers focused on a protein called UHRF1. Scientists knew that it binds to half-methylated DNA and recruits another protein to copy the methylation information to the other genetic strand. But it was unclear how UHRF1 recognized the partially methylated DNA to begin with. Was it an intrinsic property of the protein, Shinkai wondered, or were other actors involved in recruiting UHRF1 to these sites of the genome? 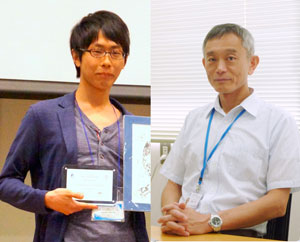 To find out, Shinkai’s group teamed up with Pierre-Antoine Defossez’s group at Paris Diderot University, as well as scientists from the RIKEN Center for Sustainable Resource Science and around the world. Together, they isolated UHRF1 from human cells and found that it formed a complex with several other proteins, including DNA ligase 1 (LIG1) — an enzyme that is important for DNA replication and repair. Further experiments identified the region within the LIG1 protein that, when methylated itself by two other enzymes, binds UHRF1. This interaction, the researchers showed, explains why UHRF1 is drawn to DNA replication sites.

Takeshi Tsusaka, a PhD student in Shinkai’s lab, says the results came as a shock to the team. “Everyone, including us, believed that LIG1 functioned just as a DNA ligase and that it had no other functions,” he says. “This is the most surprising and important finding of our work.”

The finding that LIG1 plays a role in DNA methylation suggests it could be important in cancer development as well. While it has yet to be proven, Tsusaka says: “If anybody reveals the relevance of LIG1 to cancer, we might be able to prevent tumors from growing by manipulating the LIG1 methylation state to alter UHRF1 binding.”