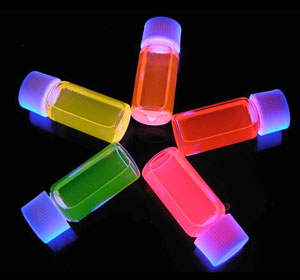 A simple way to harness the incredible brightness of quantum dots—tiny fluorescent semiconductor crystals—and realize highly sensitive molecular imaging of cancer cells and other biomedical targets has been developed by researchers at RIKEN1.

Previous research has shown that pairing quantum dots with antibodies can turn them into molecular imaging probes. In the body’s immune system, antibodies recognize and stick to specific molecules on the surfaces of invading cells. In the lab, antibodies can be created to bind to almost any molecule of interest.

“For molecular imaging inside the body, highly fluorescent probes that can target specific molecules are desirable for obtaining high-quality images,” says Takashi Jin from the RIKEN Quantitative Biology Center, who led the current study.

While quantum dots are at least ten times brighter than conventional fluorescent probes based on organic dyes and fluorescent proteins (Fig. 1), it is challenging to attach antibodies to their surfaces, Jin notes. Attempting to directly connect the tail of an antibody to the quantum dot surface tends to cause the antibodies and the quantum dots to clump together. A more successful approach has been to fix an adaptor protein to the quantum dot and then to attach an antibody to the protein. But the adaptor proteins used to date are so bulky that they impair the performance of the probe.

Jin and his team have now overcome this problem by developing an adaptor protein, called HisGB1, that is two to three times smaller than previously reported adaptor proteins. A further advantage that HisGB1 proteins have over adaptor proteins reported to date is that they more readily bind to the surfaces of quantum dots.

The researchers tested their probe using antibodies that recognize Her2 receptors, which are found in large numbers on the surfaces of certain breast cancer cells. The antibody–HisGB1 quantum dot conjugates lit up the breast tumors of mice when the animals were examined under near-infrared illumination. Without the antibody, the quantum dots did not accumulate in the tumor tissue, confirming that the antibody was playing the targeting role.

The ability to light up specific molecules inside living creatures has many potential applications, Jin says. “We would like to use HisGB1 quantum dots to non-invasively visualize the cellular dynamics in immune reactions and cancer metastasis.”