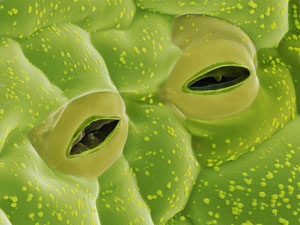 Figure 1: The KAI2 protein was important in lessening the width of plant stomata openings (pictured above), and thus likely reducing water loss through reducing transpiration. © POWER AND SYRED/SCIENCE PHOTO LIBRARY

New understandings of a protein and its effect on the chemical pathway involved in plant pore-control, cell membrane maintenance and leaf waterproofing, offers new avenues for the cultivation of drought-resistant crops for arid regions.

The findings come from a team led by researchers from the RIKEN Center for Sustainable Resource Science, who looked into a protein called Karrikin Insensitive2 (KAI2)1. KAI2 recognizes a group of chemical compounds known as karrikins, which are found in smoke and help kick-start seed germination after fire events, but which are suspected to also play a role in internal plant signaling.

The team found that the KAI2 protein helps plants survive in water-scarce conditions by closing plant stomata—pores used for ‘breathing’ through which plants can also lose water—preventing the leakage of fluids from cell membranes and fluids evaporating from leaves, among other things. This is the first time, says lead author Lam-Son Tran, that KAI2 has been shown to be involved in regulating plant adaptation to drought.

To understand the protein’s effect better, the researchers studied the effects of mutations in KAI2 in Arabidopsis thaliana, also known as mouse-ear cress. The team observed that kai2 mutant plants had greater biomass than control plants when grown under well-watered conditions, but fared worse under drought conditions. Plants with the mutation in the KAI2 gene lost over 55 per cent of their biomass under drought conditions, while control plants only lost roughly 48 per cent.

The researchers suggest that plants with KAI2 defects may have fared worse partly because their stomata opened more widely than that of the control plants, but also because they suffered greater stress-induced cell membrane damage, which decreased the ability of the plants to retain water. This cell damage may be linked to an observed drop in the production of anthocyanins—plant pigments that are stimulated during drought to help protect plants. In addition, in the kai2 mutant plants the team found a downregulation of genes involved in the formation of the cuticle—the protective, waterproofing film covering the surface of leaves. By overexpressing the KAI2 gene, the researchers were able to increase the thickness of the cuticle.

Tran says that the team’s discoveries in Arabidopsis could have implications for food crops that are fundamental to world food security. Genetically modified drought-resilient varieties, the researchers suggest, could be developed by overexpressing the KAI2 gene to boost the protein’s effects on the plants.