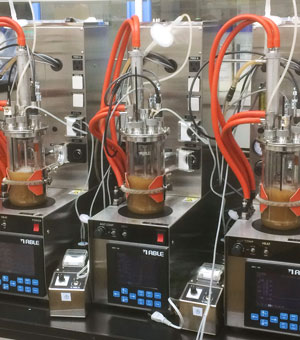 By genetically reprogramming a common microbe, an all-RIKEN team has produced industrially important maleic acid from feedstock rather than crude oil1. This achievement opens the door to more environmentally friendly industrial-scale production of this important chemical, which is a key adhesion promoter for materials like galvanized steel and nylon, as well a drug stabilizer.

Maleic acid is currently produced through a reaction that involves heating a chemical derived from crude oil at temperatures above 400 degrees Celsius. By genetically modifying Escherichia coli, however, Shuhei Noda and his co-workers at the RIKEN Center for Sustainable Resource Science have used the bacterium and glucose harvested from feedstock to produce maleate, a salt or ester of maleic acid (Fig. 1).

In addition to using a more sustainable base material, the process requires much less energy, say the researchers. “Using microbes to produce maleate enables this versatile chemical to be obtained under ordinary temperatures and pressures,” explains Noda.

Because bacteria do not normally produce maleate without genetic modification, the researchers first had to show that the bacterium was tolerant to maleate. By optimizing the E. coli strain, the researchers were then able to produce 7.1 grams of maleate per liter of base material in less than 5 days. However, optimization was not easy. Because their optimized E. coli strain carried seven inserted, or heterologous, genes, it also replicated plasmids in three different intensities, says Noda. As a result, he says, “it was difficult to obtain the best phenotype to produce the maximum amount of maleate.” 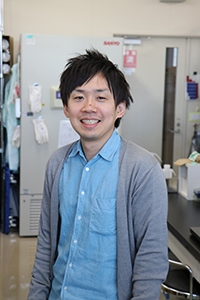 Shuhei Noda and co-workers have created an Escherichia coli strain that can produce maleate from glucose derived from biomass resources. © 2018 RIKEN

Ethanol, or common alcohol, has been produced for centuries by using bacteria to break down sugar in the process of fermentation. But, as in this study, researchers have started to produce other industrial chemicals by co-opting common microorganisms such as E. coli and yeasts. This has been attracting the attention of producers who want to find less fossil fuel or energy intensive production processes for large-scale manufacturing.

The team will have to collaborate with experts in other fields to commercialize this method, says Noda. “Various steps need to be optimized, including the processes for supplementing raw materials, developing large-scale fermentation systems and separating products.”

The group intends to continue exploring other industrially useful chemicals. “Using our platform strain, we will seek to produce other useful aromatic compounds and dicarboxylic acids [commonly used in the production of nylon],” says Noda. They will also try to make diols, a type of alcohol, and diamines, which are often used to make synthetic materials, he adds.