Mirrors vibrating at very high frequencies could create photons from nothing 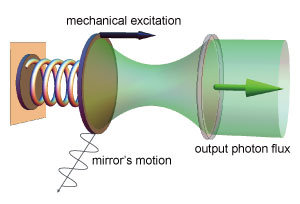 Figure 1: An optical cavity with properties within reach of state-of-the-art technology could provide an experimental realization of the dynamical Casimir effect. Modified from Ref. 1 and licensed under CC BY 4.0 © 2018 V. Macrì et al.

Virtual photons can be converted into real light by using a rapidly oscillating mirror, a theoretical analysis by RIKEN scientists has shown1.

A vacuum is not as empty as it seems. Quantum theory tells us that fluctuations in electromagnetic fields can give rise to virtual particles, which spontaneously come into existence and then just as quickly vanish.

More than just a theoretical curiosity, these virtual particles can have an observable effect. For example, two electrically conducting plates or mirrors separated by just a few nanometers are forced together by virtual photons, which appear more often on the outside of the plates than between them. Known as the Casimir effect, this phenomenon was predicted in 1948 and measured experimentally in 1996.

A fascinating variation on this is the dynamical Casimir effect, in which a rapidly moving mirror can turn the virtual photons into real ones. However, it has been challenging to observe this phenomenon experimentally because of the low light levels involved and the high speeds at which the massive mirrors have to be moved. The effect has been realized with microwave photons, but in that experiment the moving mirror was simulated using a superconducting circuit2.

Now, Franco Nori and colleagues from the RIKEN Cluster for Pioneering Research and the University of Messina, Italy, have theoretically analyzed a set-up with a real moving mirror (Fig. 1) and have shown that it could host the dynamical Casimir effect.

Optomechanical systems comprise an optical cavity formed by two mirrors, one of which is free to vibrate. Practical optomechanical structures have been created in which the mirror can oscillate as quickly as six billion times a second. But this might not be fast enough; previous theoretical analyses have indicated that the mechanical oscillation frequency must be at least twice that of the lowest frequency cavity mode before the dynamical Casimir effect can be observed.

Nori’s team conducted a more thorough theoretical analysis. “We treated both the cavity field and the moving mirror as quantum-mechanical systems,” says Vincenzo Macrì, first author of the paper. “This showed that resonant production of photons from the vacuum can be observed for mechanical frequencies equal to or even lower than the cavity mode frequencies. Our analysis indicates that current optomechanical systems could be used to observe the conversion of mechanical energy into light.

This means that light emission from mechanical motion could be achieved using optomechanical systems with vibrating mirrors working in the gigahertz spectral range—within reach of current experiments.

This result highlights the importance of precise simulations. “A more general calculation would also include many electromagnetic modes inside the cavity,” says Nori. “We are currently working on these difficult calculations.”