Memory impairment in Down syndrome linked to inhibition in the hippocampus 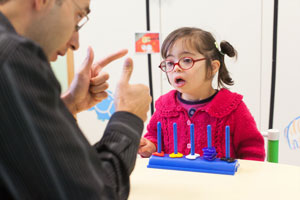 By monitoring the brain signals of live mice that had been genetically engineered to mimic humans with Down syndrome, a team at the RIKEN Center for Brain Science has gained a clearer picture of how the genetic condition disrupts the normal processes of recording and reinforcing memories1. This insight will help inform the development of drugs to offset some of the conditions Down syndrome causes.

Down syndrome is the most common genetic cause of intellectual disability. Globally, between 1 in 700 and 1 in 1,000 babies is born with the condition. It is caused by having an extra copy of chromosome 21, which results in a wide range of physical and mental disabilities. In particular, people with the condition often experience learning and memory difficulties.

No one is exactly sure how having an extra copy of chromosome 21 affects neurological processes. But a theory, which has been gaining traction in recent years, posits that the condition increases the number of neurons that inhibit excitation in the hippocampus—a critical brain structure for forming and consolidating memories in humans and rodents.

Now, Thomas McHugh, who was inspired to become a neuroscientist because his brother has Down syndrome, and colleagues have found compelling support for this theory in live mice.

They monitored the neurological signals in mouse models of Down syndrome as the mice explored a track, during which they formed memories. Then, when the mice were resting, the memories were consolidated. The researchers saw distinct changes to spikes in hippocampal activity, which are associated with memory formation and reinforcement. They also found an increase in the number of inhibitory neurons. 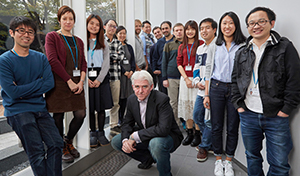 Thomas McHugh (front center) and his team at the RIKEN Center for Brain Science have found a correlation between increased inhibitory interneurons in live mouse models of Down syndrome and abnormal spiking in the CA1 network in the hippocampus. © 2018 RIKEN

“We saw both a litany of changes in the spiking properties in the hippocampi of these model mice and an increase in inhibitory interneurons,” says McHugh. “There was a very strong correlation between the two.”

This is the first such study in live mice; previous studies had focused on studying brain slices under the microscope. “There had been a disconnect between labs that study mouse models of Down syndrome and labs that look at hippocampus physiology and how it relates to memory formation and consolidation,” notes McHugh.

The connection will assist the search for ways to treat cognitive problems associated with Down syndrome. “The more we know about the physiological changes that are happening, the better drugs can be targeted or tailored,” comments McHugh.

“In the future, it will be interesting to see how consistent the changes we see are in other mouse models of Down syndrome and whether we can put together a bigger picture of what is going on in the human brain,” he adds.