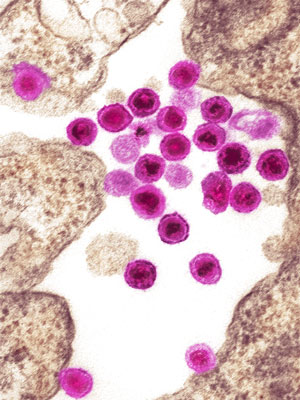 Genes in mouse embryonic stem cells that are required to prevent gene disruption from ancient viruses have been identified by RIKEN researchers1. This catalogue of genes will greatly benefit future studies of the silencing mechanism.

The genomes of mammals contain relics of ancient viral infections—fragments of viral sequences known as retroelements. Since these fragments are capable of jumping around the genome, they still pose a risk to genome stability, and so it is important for the host genome to inactivate them.

Yoichi Shinkai of the RIKEN Cellular Memory Laboratory considers the regulation of retroelements one of the most important questions in biology. He has long been interested in the role of methylation in gene silencing, particularly the methylation on lysine 9 of histone H3 (H3K9me3), a protein that is part of nucleosomes that condense DNA into tight chromatin. Retroelements present a good model system for his team to study this process.

To undercover the components needed to silence retroelements, Shinkai’s team produced a mouse embryonic stem cell line that expressed a fluorescent reporter driven by a viral enhancer and promoter. They used this cell line in a genome-wide knockout screen, in which they systematically removed over 19,000 genes that encode proteins.

The team found over 80 genes that contributed to retroelement silencing. Their top eight candidates are known to be involved in the process, and included the geneSetdb1, which encodes for an enzyme responsible for methylating H3K9.

One candidate the researchers analysed in detail was a novel molecule they named RESF1. They showed that it interacts with SETDB1 and binds to the SETDB1-targeted genome loci. The team confirmed this by removing the Resf1 gene from cells and observing that the reporter provirus was no longer silenced. They also confirmed that RESF1 silenced endogenous retroviral elements in the mouse genome.

Many of the genes found by the screen were part of a diverse range of protein complexes, which indicates unexpected complexity. “SETDB1 cooperates with different protein complexes depending on the type of retroelement for silencing,” explains Kei Fukuda, a postdoctoral researcher in Shinkai’s lab who analysed RESF1 and other identified genes. “It’s unclear what determines the specificity.”

Shinkai next plans to explore the functions of other candidate genes and unveil their detailed mechanisms. He sees his team’s knockout mouse embryonic stem cell lines as a great resource for researchers investigating other physiological roles of H3K9me3, such as telomere maintenance or the silencing of exogenous viruses.