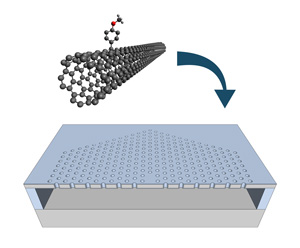 Figure 1: Doped carbon nanotubes coated onto a silicon substrate etched with microcavities, strongly emit single photons of light when excited by a laser. Modified from Ref. 1 and licensed under CC BY 4.0 © 2018 A. Ishii et al.

By coating chemically doped carbon nanotubes on a silicon substrate riddled with tiny holes, RIKEN researchers have demonstrated a powerful source of single particles of light, or photons1. It can spew out up to about 17 million single photons a second, making the source promising for use in quantum information technologies, which could be used to send uncrackable messages.

Light is already used to carry information at high speeds around the globe via a vast network of fiber-optic telecommunications cables. These systems carry data using classical states of light—but light is also a citizen of the quantum world, sometimes behaving like a wave and sometimes like a stream of particles called photons. These light particles carry quantum information that can be used to encode data, says Akihiro Ishii, a researcher at the RIKEN Nanoscale Quantum Photonics Laboratory led by Yuichiro Kato.

Communication systems based on quantum information are of great interest as it is impossible to intercept data without disturbing the data itself, preventing covert eavesdropping. But early systems for generating single photons were the size of a room. For practical applications, nanomaterials that emit single photons are eagerly sought.

Single-walled carbon nanotubes—structures akin to a flat sheet of carbon atoms rolled up into a cylinder—had previously been shown to emit single photons when excited by a laser. Kato, Ishii and their colleagues have now dramatically enhanced their photon emission by integrating them on silicon containing a regular array of holes.

Yuichiro Kato (fourth from left) and his group have found that carbon nanotubes coated onto silicon photonic-crystal microcavities are bright single-photon emitters. © 2018 RIKEN

The team coated a thin film of chemically doped carbon nanotubes onto a silicon substrate that had tiny holes etched into its surface so as to form photonic-crystal microcavities (Fig. 1). They then excited the nanotubes with a laser.

A small proportion of the nanotubes aligned perfectly with one of the microcavities on the silicon. “When a carbon nanotube is coupled to a microcavity that has a very small volume, the photon emission efficiency is enhanced by a phenomenon known as the Purcell effect,” Ishii explains. The team found that this coupling enhanced light emission from the nanotubes by about 50 times.

What’s more, the device produced single photons with high purity at room temperature, even when the intensity of the laser beam was ramped up. “This result means that our devices are durable and can offer good performance,” Ishii says. “High-power excitation yields bright single-photon emission.”

The team is now working on modifying the carbon nanotubes and the underlying silicon microcavities so that they emit bright single photons at the main wavelength used for telecommunications.