Being sick could be making you more worried say researchers, who have linked changes in mice immune cell metabolism to altered brain chemistry and behavior

Often when you come down with a heavy cold or the flu, you don’t just feel sick, you feel downright miserable. RIKEN researchers have found a possible physical explanation for the feeling of wretchedness that can accompany infections. In a study straddling several fields, the team have broken new ground by tracing behavior in mice that links anxiety to a switch in the metabolism of their immune cells1.

It turns out that when an infection activates the immune system, infection-fighting T cells switch to a mode that consumes more amino acids. This switch, the team found, leads to fewer amino acids in the bloodstream and the brain. The shortage of amino acids in the brain reduces the amount of serotonin and dopamine that the brain can produce, leading to anxious mice.

This is the first-time activation of immune responses has been linked to behavioral changes, which could have very real implications for treating disease-linked anxiety and depression.

A history of grumpy mice 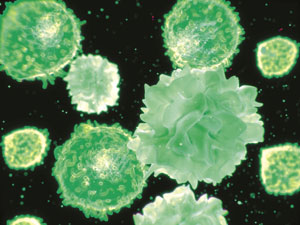 A casual remark from a colleague first made immunologist Sidonia Fagarasan consider there might be a connection between the activation of the immune system and mouse behavior. “[This colleague] came to me one day and said, ‘Sidonia, I hate infecting the mice because they become so aggressive’.” Then the question just hit her she recalls: Why exactly are sick mice particularly difficult?

Fagarasan, a team leader at the RIKEN Center for Integrative Medical Sciences, suspected the answer lay in white blood cells known as T cells. In their normal, non-activated state, these blood cells produce energy using a process called oxidative phosphorylation. But when they become activated to fight a pathogen in the body, they switch to another metabolic process called aerobic glycolysis. While this process consumes more amino acids and is not as efficient at generating energy as oxidative phosphorylation, it has the advantage of producing more molecular building blocks the cell needs to proliferate and mount a protective immune response.

A crucial clue came from mice that lacked the ability to make a protein known as PD-1. This protein acts as a brake on the immune system and returns T cells to metabolism by oxidative phosphorylation. Fagarasan and her co-workers measured the amino acid levels in the bloodstream of mice that lacked PD-1 and were permanently in infection-fighting mode, with the mice’s T cells using aerobic glycolysis metabolism. To their surprise, the team found that these mice had lower levels of amino acids in their blood than control mice.

“We were surprised to see the depletion of almost all amino acids in the serum,” recalls Fagarasan. “We’d thought that blood chemistry is dictated by the liver... But we were stunned when we realized that activation of the immune system actually alters blood chemistry. That was our first ‘wow’ moment.”

Is an amino-acid deficiency the reason mice become more anxious? 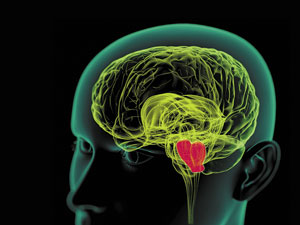 In the second stage of the investigation Fagarasan explored the effect on brain chemistry of reduced amino acid levels in the bloodstream. The researchers measured the levels of two amino acids, tyrosine and tryptophan, in the brain and found that they were present in lower levels in mice lacking PD-1 compared to normal mice.

Again, Fagarasan and her team found that mice without PD-1 had lower levels of serotonin and dopamine than control mice.

The last link in the chain was to see whether this noticeably affected mouse behavior. The team discovered that the mice lacking PD-1 were indeed more anxious than normal mice. “It took us two years to set up all the behavioral studies,” says Fagarasan. “We saw that these mice act strangely: they don’t move; they’re lazy; they’re scared; they behave differently. That was our second &quo;wow’ moment.” 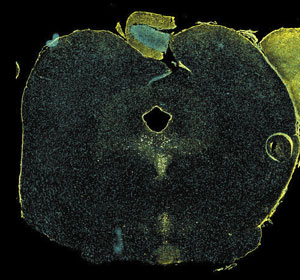 Neurons (yellow) in PD-1-deficient mice lack the neurotransmitter serotonin (should be shown in magenta). © 2018 RIKEN Center for Integrative Medical Science

With the final piece of the jigsaw in place, the picture became clear. Essentially, it suggests that the body is channelling resources from the brain to the immune system. “It’s a trade-off,” explains Fagarasan. “When fighting an infection or cancer, your body uses resources earmarked for the brain to boost your immune system.”

The team is now working to see whether the same mechanism operates in humans. If it does, it could have implications for treatments when a person’s immune response has been activated, such as in those receiving cancer therapy.

Indeed, importantly, when the researchers fed the PD-1-deficient mice with a high-amino acid diet of tryptophan for example, the mice recovered and behaved normally.

“These findings may have implications in any clinical condition that results in a systemic immune response including infections, autoimmunity and cancer immunotherapy,” comments Vassiliki Boussiotis of Harvard Medical School, who wrote a News & Views article on the study for Nature Immunology.

And it’s even quite likely, says Fagarasan, that a diet high in certain amino acids could help make you feel better next time you’re battling a common cold. 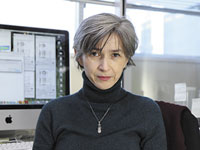 Sidonia Fagarasan is the team leader of Laboratory for Mucosal Immunity at RIKEN’s Center for Integrative Medical Sciences. Her research activity includes work on the impact of immune systems on the diversity, structure and resilience of gut microbiota. In 2013, she received the National Institute of Science and Technology Policy (NISTEP) Award from the Ministry of Education, Culture, Sport, Science and Technology (MEXT) for work explaining the relationship between digestive tract microbes and immune function. She has been published in many highly-regarded journals, such as Science, Immunity, Nature, Cell and Proceedings of the National Academy of Sciences.