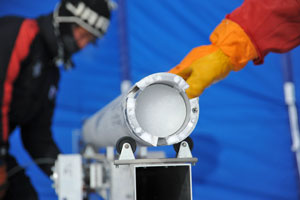 Figure 1: An ice core that has been drilled from near the Dome Fuji station in Antarctica. © 2019 National Institute of Polar Research

An instrument for analyzing isotopes that is sensitive enough to detect trace amounts of sulfates in Antarctic ice cores has been developed by RIKEN researchers1. Its sensitivity allows it to monitor environmental changes with a resolution of 1 year.

Scientists can obtain detailed insights into when past climatic changes occurred and how they affected the environment by analyzing sulfur isotopes in Antarctic ice cores. When present in high concentrations, these isotopes can also reveal how sulfur moves through the atmosphere after volcanic eruptions.

But the amount of sulfates in ice cores is often too low to obtain precise isotopic readings using existing analytical equipment. Consequently, previous analyses had to use thick samples, which limited their time resolution to 50–100 years. But environmental scientists would like to examine sulfur isotopes over much shorter time frames.

“In many cases, chemical effects resulting from climatic or environmental events appear within 1 year,” says Kazuya Takahashi of the Astro-Glaciology Research Group at the RIKEN Nishina Center for Accelerator-Based Science. “But we often miss these important events, as most analytical systems provide only a rough time resolution.”

Similar to standard sulfur isotopic measuring devices, Takahashi’s instrument consisted of an elemental analyzer, cryo-flow device and an isotope ratio mass spectrometer. But Takahashi and his team upgraded the system’s components to improve its sensitivity. In particular, they used thinner tubes in the cryo-flow device and replaced the conventional tin cup used in standard systems with a sulfur-free aluminum cup for heating and drying samples.

The team then tested their system on two sections of an Antarctic ice core drilled at the Dome Fuji station in 2001 (Fig. 1). The top section included surface snow and the lower one contained a high concentration of volcanic sulfate, which was previously linked to the Krakatau volcanic eruption of 1883.

The team examined the instrument’s sensitivity at various sulfate concentrations and found it was able to obtain precise measurements of sulfur isotopes in samples containing miniscule amounts of sulfur. The results were consistent with previous analyses carried out with standard measurement systems without the need for large ice samples. Unlike conventional methods, the modified system provided sulfur isotopic measurements corresponding to a time resolution of less than 1 year.

The device also detected a higher concentration of sulfate in one of the ice samples, indicating a large volcanic eruption. “We can use this advanced system to estimate the size of past volcanic eruptions and their impact on the environment,” notes Takahashi.