Uncovering how tumors enlist support from the surrounding microenvironment 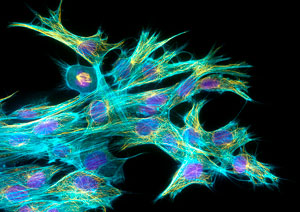 Figure 1: Fibroblasts are cells that give rise to connective tissue and are important in wound healing, but RIKEN researchers have now uncovered a possible mechanism by which they can be co-opted by cancer cells to promote tumor growth. © DR TORSTEN WITTMANN/SCIENCE PHOTO LIBRARY

A possible mechanism by which cancer cells may enlist other cells to facilitate tumor growth has been identified by RIKEN researchers1. This finding may eventually lead to new strategies for combating cancer.

Most efforts to treat cancer focus on the tumor cells themselves, but these are located in a larger ‘microenvironment’ that can profoundly affect a patient’s prognosis.

A team led by Nobumoto Watanabe of the RIKEN Center for Sustainable Resource Science is especially interested in fibroblasts, which play a supportive structural role in many tissues and are important for wound healing. While not cancerous themselves, fibroblasts can actively support malignant growth.

“Cancer-associated fibroblasts occupy much of the tumor microenvironment,” explains Kruthi Suvarna, a graduate student in Watanabe’s lab. “We were intrigued by how cancer cells activate them.” However, these cells are generally poorly characterized, and this process has proven difficult to study.

Activation of fibroblasts is generally associated with increased migration. So Watanabe’s team designed an assay that enabled them to screen roughly 16,000 chemical compounds to identify molecules that interfere with this cellular mobilization. They cultivated thin layers of fibroblasts in the presence of breast cancer cells, and then ‘wounded’ those layers with a scratch—a trigger that induces the activation of fibroblasts to heal the wound. 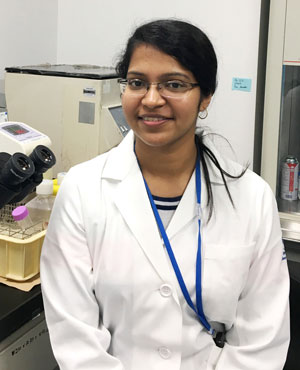 Kruthi Suvarna and her colleagues have identified a potential mechanism by which cancer cells may enlist other cells to facilitate tumor growth. © 2019 RIKEN

Out of their original chemical library, the team identified a handful of compounds that inhibited migration in the presence of cancer cells. Importantly, no such inhibition occurred when fibroblasts were cultured on their own, indicating that the mechanism was specific to cancer.

The researchers identified a cellular target for one of these compounds, NPD8733. Valosin-containing protein (VCP) is associated with a wide range of important biological processes, including critical safeguards against cancerous growth. Although VCP has never before been tied to fibroblast activation, Suvarna and colleagues showed that inhibition of VCP markedly impairs activation and migration of fibroblasts, and they were even able to identify the specific domain of VCP bound by NPD8733.

However, it is unclear how NPD8733 modulates VCP function, and Suvarna—now a postdoc at the RIKEN Center for Advanced Intelligence Project—sees this as an important follow-up goal. “It would be interesting to study genes upregulated or downregulated in activated fibroblasts upon treatment with NPD8733,” she says.

This screen also identified other potentially useful inhibitor molecules, but the researchers have not yet uncovered targets for these agents. That will be another future objective for Watanabe’s team. “We’re hoping to improve our methods for identifying target proteins,” says Suvarna.