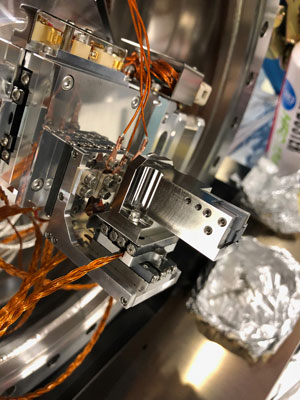 The monochromator developed by Ichiro Inoue and his team enables the spectral brightness of x-ray free-electron lasers (XFELS) to be enhanced by six times compared to conventional XFELs. © 2019 RIKEN SPring-8 Center

A simple way to greatly improve the brilliance of x-ray lasers has been demonstrated by RIKEN researchers1. This advance promises to both free up precious experimental time on big x-ray laser facilities and enable new experiments.

X-rays are routinely used for scanning bags at airports and capturing medical images. In both cases, x-rays are generated by x-ray tubes, the x-ray equivalent of the electric light bulb. The x-ray beams they produce are weak and the waves making up the beams are out of sync with each other.

For more demanding applications, such as taking picosecond snapshots of chemical reactions and studying the structures of biomolecules, viruses, and smart materials, researchers need much more intense x-ray beams whose waves are in sync. For these applications, they use large x-ray facilities known as x-ray free-electron lasers (XFELs).

But XFEL beams have quite a wide spread of x-ray photon energies. Since many experiments require x-ray beams with a narrow range of photon energies, researchers often have to throw away many of the x-ray photons to narrow the photon-energy spread. This makes experiments take longer to complete, which is a problem as the competition to get time on the handful of XFEL facilities around the world is intense.

Now, Ichiro Inoue of the RIKEN SPring-8 Center and co-workers have demonstrated a straightforward way, called self-seeding, to generate x-ray beams with a sharp distribution of photon energies without sacrificing beam intensity. They boosted the spectral brightness by six times compared to conventional XFELs.

The researchers achieved this by placing a monochromator—a device designed to narrow the photon-energy spread of an x-ray beam—between two long banks of magnets, or undulators. The first undulator creates an x-ray laser beam, and the monochromator selects a narrow-band x-ray beam, which is used as a ‘seed beam’ and amplified in the second undulator.

The team’s monochromator uses reflection between two silicon crystals. It generates the seed beam more efficiently and is easier to use than earlier monochromators based on transmission through a thin diamond crystal.

Self-seeding with the silicon reflection monochromator is simpler to employ. As well as freeing up XFEL facility time for more experiments, it will let physicists explore new phenomena that occur only at very high x-ray energies. “This method can be easily implemented at current XFEL facilities,” notes Inoue. “Colleagues at other XFEL facilities have told me they are considering trialing our seeding method at their facilities. I’m really excited about the experimental results that this method will enable.”