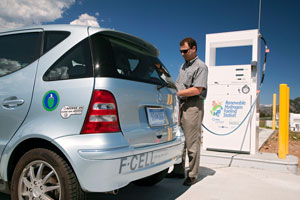 Hydrogen fuel could be used to power the cars of the future. © JIM WEST/SCIENCE PHOTO LIBRARY

A low-cost, stable catalyst for generating hydrogen fuel from water has been found by RIKEN researchers1. This development could make the production of hydrogen from water and sunlight more economically viable.

Hydrogen is a highly attractive, energy-efficient renewable fuel source that produces only water when burned. It can be generated from sunlight using proton-exchange membrane electrolysis cells. But because the conditions in these electrolysis cells become acidic, most catalysts corrode in them.

The only catalysts that have been found to be stable under such conditions are those based on iridium oxide, but iridium is scarce and expensive.

“Iridium is rarer than gold,” says Hideshi Ooka of the RIKEN Center for Sustainable Resource Science (CSRS). “One study found that there simply isn’t enough iridium in the world to meet the global energy demand.”

Now, Ailong Li, also of the CSRS, Ooka and their co-workers have discovered a stable catalyst, gamma manganese oxide (γ-MnO2), for proton-exchange membrane electrolysis cells that is about a million times more abundant than iridium. They found that γ-MnO2 is stable in acid in a specific range of potentials.

The material had been overlooked previously because predictions based on thermodynamics indicated that it should be unstable in acid. But it dawned on Li that since γ-MnO2 is generally made using concentrated acid, it may be stable in acid under certain conditions. 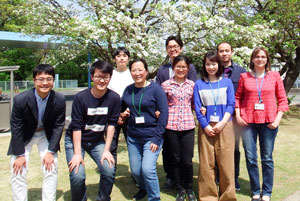 Ryuhei Nakamura (center of second row), Ailong Li (second from left in first row), Hideshi Ooka (first on the left in first row) and colleagues have found that oxides based on the Earth-abundant element manganese are stable for the electrocatalysis of the oxygen evolution reaction in proton-exchange membrane fuel cells. © 2019 RIKEN

“Li’s knowledge of the synthetic procedures in acid was critical for us to test this material,” explains Ooka. “Otherwise, we would have ignored this material, just as many other groups have in the past.”

To check the effect of the potential on the catalyst’s stability, the team analyzed the catalyst and the water it was immersed in using ultraviolet–visible spectroscopy. They found that in a narrow potential window of 0.1 volts it was so stable that it has not degraded significantly even after more than a year of continuous electrolysis.

Ooka explains that the lesson from the study is not to rely on oversimplified analyses based on thermodynamics. “Thermodynamics just tells you that this material could dissolve,” he says. “But it doesn’t mean it will.”

The team is now optimizing their catalyst toward industrial hydrogen production. They also plan to use their spectroscopic technique to see whether any other materials have similar windows of stability. Looking further ahead, Ryuhei Nakamura, who led the team, says: “We will seek to combine this technique with carbon dioxide fixation. That would allow us to produce chemicals and fuels from water and carbon dioxide, mimicking photosynthesis, which would truly bolster the sustainability of human society.”