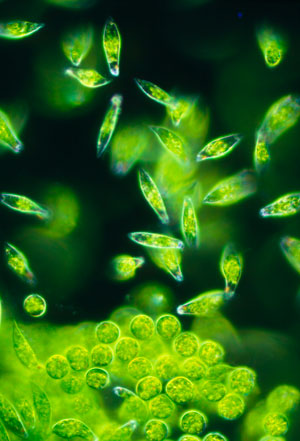 Figure 1: A light micrograph of a group of the single-celled protozoa Euglena gracilis (the elongated cells in the image). A RIKEN-led team has fabricated a device that can isolate single cells of these algae and monitor the metabolites they produce. © SINCLAIR STAMMERS/SCIENCE PHOTO LIBRARY

A glass device fabricated by RIKEN chemists can trap several motile cells at once, allowing their metabolism to be monitored over time1. The researchers demonstrated the device’s potential by using it to track the production of a metabolite in single algal cells.

Most cells live in groups, either in communities or organs. To discover more about the inner workings of cells, biologists desire to be able to take individual cells and monitor their metabolism when they are isolated from these communities. This is not too difficult for static cells, but is much more challenging for cells that can move.

Now, Yo Tanaka and Nobutoshi Ota at the RIKEN Center for Biosystems Dynamics Research and co-workers have made a microfluidic device that can trap up to about 30 individual cells at one time so that their metabolism can be monitored using an analytic technique known as Raman microscopy.

The device contains channels that are open at one end but have a barrier at the other end. The team optimized the barrier’s height so that it was high enough to trap cells, but low enough to allow the culture medium to flow.

To test the device, the team used the highly motile algae Euglena gracilis (Fig. 1), which has attracted interest because of its potential to produce useful bioproducts. They monitored the synthesis of a polysaccharide called paramylon, which E. gracilis converts into wax esters under low-oxygen conditions. These wax esters could be used as a biofuel for aircraft and rockets. Using the device, the researchers observed the formation of granules of paramylon over 22 hours.

Interestingly, paramylon granules did not form in isolated cells when medium was not supplied, but they did form with medium supply when several isolated single cells were cultured together. “This indicates that the local environment, supported by medium circulation, affects the photosynthesis of E. gracilis cells even when plenty of light and initial nutrients are supplied,” notes Ota.

The team is confident that their device will be useful for researchers working on single cells. “We’ve demonstrated simple isolation, culturing and time-course observations of single motile cells on a single platform,” says Ota. “Since it only needs a liquid-delivery system for isolation and culturing and is compatible with various optical measurements, it is easy to introduce at a laboratory level and will be useful for single-cell analysis of motile cells.”

The researchers intend to use the device to see how E. gracilis cells behave when flow rates are too fast. “This knowledge may be useful for controlling the growth of E. gracilis and other microalgae,” notes Ota. “It might also be possible to utilize E. gracilis as a biological sensor for flow rate or flow pressure.”