To tackle threats to global food security, symbiologists need to understand the natural balance between plants, pathogens and their environment, says Ken Shirasu 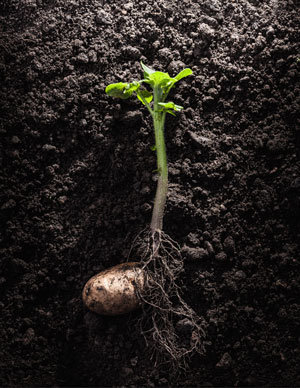 Monoculture is increasing, but even in the 1800s it had devastating consequences. Ireland's dependence on one potato species, Solanum tuberosum, and the spread of water mould, Phytophthora infestans, led to famine and the death of more than a million people during the Irish Potato Famine. © Dan Brownsword/ Getty Images

The well-stocked shelves of our supermarkets hide a food fight happening in and on the ground. Crops are becoming more vulnerable to agrochemical-resistant pathogens—pathogens such as fungi, bacteria and nematodes. We need new strategies to combat these threats, and we can learn important lessons from the complex defenses put up by plants.

The pathogen problem is layered. While increasing plant domestication and monoculture have allowed more intensive cropping to feed multiplying mouths, these trends come with the risk of pathogen outbreaks freed from diversity’s protections. Food and human movement add to the problem, with pathogens becoming frequent international travellers. On top of that, agrochemicals are increasing selective pressures, so when a fungus, bacterium or nematode finds a way to survive, it emerges into a landscape without competitors and can spread like wildfire.

Fungal diseases are of particular concern to crops. Between 2016 and 2019, a blast fungus spreading in key farming regions reduced Bangladeshi wheat yields, the country’s second most important staple, by half; India recently announced a three-year wheat growing “holiday” in neighbouring areas. In Africa, wheat stem rust fungus UG99 has been aggressively mutating and causing havoc for decades, and a 2016 outbreak in Sicily was dubbed one of the worst European outbreaks in 50 years. Bananas have also weathered a series of crises from fungal Panama disease. Recently, the popularity of a few banana species has exacerbated the problem. In 2015, Asian banana exports dropped 46 percent, a figure attributed to both storms and the disease.

We have a similar, if less extreme problem with strawberries in Japan, of which more than 100,000 metric tonnes are grown each year. Our soft, sweet strawberry varieties are vulnerable to necrosis, wilt and rot from fungi of the genus Colletotrichum.

Fungi have a unique relationship to plants. They are often necessary for plant survival, many living symbiotically, exchanging nutrients for energy. But in more destructive forms they’re wily, often able to clone themselves. Cloning encourages species to hoard genetic tricks, such as transposable elements, which can change a fungus’s genome by jumping spots and replicating in a cut-and-paste action. Cloning then allows strains with useful mutations to replicate and rapidly spread.

At RIKEN, my team recently identified a particularly virulent species of Colletotrichum, known as C. fructicola 1. In a soon-to-be published paper, we found evidence of huge genome and chromosome reorganisation in C. fructicola’s most virulent phenotypes. The study shows how quickly C. fructicola has adapted to fungi-resistant strawberry cultivars developed by Japanese strawberry breeders, and why it continues to cause expensive export problems.

Containing plant pathogens by harnessing the same strategies used by plants isn’t simple. Until now, scientists have largely avoided studying the incredible complexity of whole-system molecular interactions. But now symbiologists—the scientists interested in organism-to-organism interactions—use high-throughput sequencing. Using this, they can track changes in microbe genomes in response to their environment, which has led to a renewal in international efforts to understand microbial environments holistically.

The advantage of this approach is robustness. Agrochemicals tend to target a single protein, while an ecosystem’s defences are systems-based and multifaceted, making it more difficult for pathogens to mutate to overcome them.

While there’s still a lot of groundwork to lay, we’ve made headway. RIKEN recently contributed some promising efforts to halt the expansion of Striga weeds, a major food security threat affecting more than 60 percent of farmland in sub-Saharan Africa. Striga weeds leach off the roots of important African cereal crops such as sorghum, millet, sweetcorn and rice. The weed causes crop losses each year estimated at roughly US$1 billion, and it’s spreading.

In 2015, another RIKEN researcher and I were part of an American, Australian and Japanese collaboration that in Science described the strigolactone hormone chemical receptor, KARRIKIN INSENSITIVE 22. Plants release strigolactone to promote symbiotic interactions with soil microbes. Striga seeds detect plants by germinating in the presence of strigalactone in order to take advantage of a nearby host.

Our 2015 study helped stimulate several projects on strigolactones. Groups in Canada, the Netherlands and at Nagoya University in Japan began developing chemicals mimicking the function of the hormone.

At the end of 2018, the Nagoya team developed a molecule designed partly around our receptor work that was published in Science3. The idea is that by applying low concentrations of the Nagoya team’s molecule to uncultivated soil, farmers could stimulate the germination of Striga seeds already in the ground. Without a host, the parasites would germinate and die.

While this new molecule needs to be thoroughly tested to make sure it doesn’t have a negative effect on crops, it could be a huge leap forward in the fight against the weed. 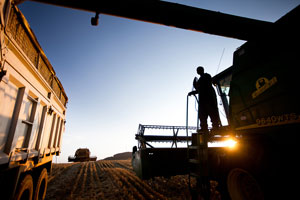 Major collaborative centers and laboratories: While this article discusses a few of RIKEN’s major focal points for international collaboration, in 2018 RIKEN had 255 MOUs or cooperation agreements in 35 different countries and regions. The number of these agreements are reflected in the colors on the map and below. *As of March 31, 2019; © 2019 STFC Rutherford Appleton Laboratory

We need many more of these findings, but symbiologists work in a black box. Why? For one, we need to have isolates of all the microbes in a system, such as a soil, to understand whole-system interactions. Not only are isolates diverse, they aren’t always easy to grow in a lab; for example, some estimate that only one percent of bacteria are culturable.

Plants and soils also function in an open environment, which means their microbes are more diverse than those in a closed environment, such as the gut, which is one of the fastest growing areas of symbiology. Nonetheless, there’s a lot to learn from gut research’s successes.

For example, we must start to understand plant microbiomes, which are common groups of microbes that, as a community, become very robust and stable. Gut researchers have identified roughly 2,000 core microbiomes.

Right now, large efforts are underway in Germany and the USA to sequence plant microbes. If some prove common, they should eventually resolve into core microbiomes.

The German government, despite boasting one of the world’s largest agrochemical industries, has recognized the importance of symbiology. In 2017, Germany’s main research funder, the German Research Foundation (DFG), launched a huge program to study the rhizosphere—the chemicals, minerals, microbes and fungi that interact around a plant’s roots. The program has been dubbed one of five new life-science priority programs. This is a clear mandate to move large symbiological projects in plant science forward.

Unfortunately, while important, the 2014 Nagoya Protocol on Access and Benefit Sharing has made symbiological study trickier. The biodiversity protocol limits the movement of samples internationally to preserve global biodiversity, and importing or exporting samples now requires more paperwork. However, it will also force us to do the hard work on local microbes and soils, which will ultimately benefit Japanese farmers.

To accelerate the process, the Integrated Symbiology (iSYM) program at RIKEN, which was established in 2018, is in the process of sequencing a lot of Japanese pathogens and establishing a plant phenotyping platform. We expect this to have a huge impact, allowing us to monitor plant parasite movement. It will help us hunt evolving pathogens and resistant cultivars at both a genome and phenotypic level.

We hope that Japan will follow a route similar to Germany and issue a strong financial mandate to construct Japanese symbiological models.

Eventually, we hope we will learn to fight the pathogens affecting Japanese farmers in whole-of-system ways; in other words, to fight like a plant.

Ken Shirasu is the Group Director of the Plant Immunity Research Group. After graduating with a degree in Agricultural Chemistry from the University of Tokyo, Shirasu did a PhD in genetics at the University of California, Davis, and then went on to work as a Postdoctoral Fellow at The Salk Institute/Nobel Foundation in the USA. After becoming a group leader at the Sainsbury Laboratory in Norwich, UK, he moved to a group leader position at RIKEN in 2006. He has previously been director of the International Society for Molecular Plant Microbe Interactions and Chair of International Committee of The Japanese Society of Plant Physiologists. He was a Thomson Reuters highly cited researcher from 2014–2018.