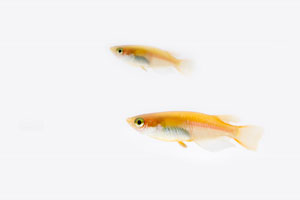 A peptide expressed in the brains of fish helps to determine the different mating behaviors of the two sexes, RIKEN and University of Tokyo scientists have found1. Understanding neurologically what makes the sexes behave differently in courtship could reveal how to reverse male–female animal mating behaviors.

For a long time, the sexual behavior of vertebrates, particularly mammals and birds, has been considered basically irreversible. The sex steroids produced early in life generally determine their sexual behavior.

But there are exceptions. Fish belonging to the teleost order, for example, can undergo physical and behavioral sex reversal in the wild. Researchers have even reversed the mating behaviors of such fish by manipulating their hormones. However, the genetic regions affected by hormones that govern vertebrate sexual reversibility have remained elusive.

Figure 2: Fluorescence micrographs of the brains of male (left) and female (right) medaka fish. They show that neuropeptide B (green regions) is expressed only in nuclei in the female brain. © 2019 RIKEN Center for Brain Science

Now, Towako Hiraki-Kajiyama at the RIKEN Center for Brain Science and her colleagues have examined the brains of medaka (Fig. 1)—a teleost fish—for gene expression that depends on the sex of the fish.

The team examined gene expression differences in medaka and found that a gene coding for neuropeptide B (NPB) is expressed exclusively in nuclei in the female brain (Fig. 2). Importantly, the brain region where Hiraki-Kajiyama’s team discovered this female-specific NPB expression is the region most related to sexual behavior. Together, these findings suggested that expression of NPB might be the neurological difference between the mating behaviors of male and female medaka.

To confirm this, the team knocked out the npb genes and their protein receptors and found that female sexual behavior was altered when NPB was absent—a clear indicator that it is implicated in the genetic determination of sexual behavior. 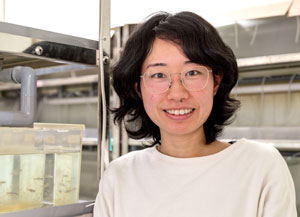 Towako Hiraki-Kajiyama and her co-workers have found that neuropeptide B mediates female sexual receptivity in medaka fish in a female-specific manner. © 2019 RIKEN

The way in which the knockout affected sexual behavior surprised the researchers. “Most females spawn within a minute after viewing the courtship display of males, but many of the female knockout fish spawned without getting courtship display from males,” Hiraki-Kajiyama says. “I would never have anticipated such a change, so I was surprised and very interested.” This might mean that the NPB system enables females to select a suitable mate by mating only with males that show courtship display.

Since NPB is well conserved among vertebrates, including humans, it could affect sexual behavior in other species. “NPB is also expressed in mammals in brain regions thought to be homologous to the nuclei that have female-specific NPB expression, so NPB may be involved in female sexual receptivity in mammals,” notes Hiraki-Kajiyama.