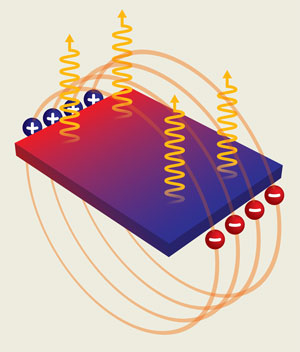 Light-emitting ‘exciplex’ complexes can form over far greater distances than ever suspected, a RIKEN-led team has shown1. This discovery could lead to highly sensitive sensors and photodetectors.

An exciplex is an excited-state complex formed between a molecule that donates electrons and one that accepts electrons. Exciplexes are generally of interest for their favorable light-emission properties. In particular, the excited state is readily able to undergo a process that enhances the efficiency of organic light-emitting diodes (OLEDs).

The two molecules usually have to be within a few nanometers of each other for an exciplex to form. However, by placing the electron donor and electron acceptor on either side of a spacer layer, Yong-Jin Pu from the RIKEN Center for Emergent Matter Science and his collaborators have created exciplexes when the donor and acceptor are up to 70 nanometers apart.

The team started with a spacer layer 10 nanometers thick, and then increased the thickness in increments of 10 nanometers. Remarkably, exciplex light emission was still seen even when the spacer thickness reached 70 nanometers.

“We tried to create a new and unique exciplex state, in which the electron-donor molecule and the electron-acceptor molecule are separated by a thick spacer layer,” Pu explains. “The discovery was a big surprise—the spacer was much thicker than the 10-nanometer spacers previously reported. The exceptional thickness goes far beyond previous preconceptions.”

Yong-Jin Pu (far left) and his team have found that light-emitting exciplex complexes can form over far greater distances than ever suspected. © 2019 RIKEN

The team used four different electron-donor molecules to demonstrate that the light emission really was from exciplex formation. “The type of donor molecule must influence the emission wavelength of the exciplex, due to the change of energy difference between the donor and acceptor,” Pu explains. The emissions varied just as expected, confirming the formation of exciplexes.

Although the mechanism behind such long-distance exciplex formation is not yet well understood, the spacer layer plays an important role, Pu says. The spacer forms an exciplex state with the donor molecule and also with the acceptor molecule, the researchers suspect (Fig. 1). “The spacer molecule behaves as an acceptor to the donor molecule, and simultaneously behaves as a donor to the acceptor molecule,” Pu says. “We are now trying to understand the mechanism and hidden physics of this long-distanced exciplex formation and its emission.”

The team is also considering possible applications of their surprising discovery, which may lie outside of the usual OLEDs. “We anticipate that this totally new exciplex could lead to highly sensitive sensors or photodetectors to external stimulus,” Pu says.