Deepening our understanding of selfish behavior

RIKEN researchers have identified distinct neural processes that occur when we make decisions for the benefit of others. 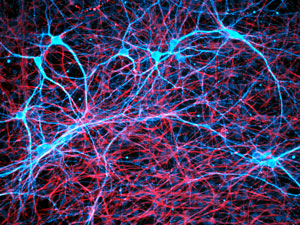 Is a selfish person just processing the decisions that result in rewards to others differently? Perhaps, suggests a recent RIKEN study. A RIKEN team, led by Hiroyuki Nakahara of the Laboratory for Integrated Theoretical Neuroscience at the RIKEN Center for Brain Science, discovered this when they examined 36 healthy volunteers aged between 20 and 32 years. Their aim was to find out which parts of the brain are activated when considering giving rewards to others.

These volunteers were asked to choose one of two options, each with a baseline reward to themselves. One option then involved an extra financial reward for the participants and the other, a reward to ‘others’—in this case a series of well-known charities.

The group looked at the what happened when a person is giving an extra reward to one of the charities, using functional magnetic resonance imaging (fMRI) and a computational modeling method called a connectivity analysis. They discovered that there is a three-stage cascade process involved.

In the first stage, the brain detects a perceived benefit to others. The first stage was accompanied by neural activity in the right temporoparietal junction (right TPJ) and the left dorsolateral prefrontal cortex (left dlPFC)—regions that are well known to play a role in attention and social interaction.

The second stage involves understanding the impact of the offer of value on the outcome. This corresponded to activity in the right anterior insula (right AI), a key node of a brain circuit called the salience network, which has been associated with empathy.

The third stage is the actual decision-making process. Decision-making corresponded to activity in the medial prefrontal cortex (mPFC), supporting findings from previous studies that have implicated the mPFC in strategic reasoning.

Next, the team explored whether there might be any common patterns in the neural pathways involved in the choice to give to others in individuals who can broadly be described as either generous or selfish. For this, the team used a test established by social psychologist Paul A. M. Van Lange of Vrije Universiteit Amsterdam in the 1990s. The test enables scientists to gauge a person’s preference regarding the allocation of rewards to themselves and others. This social value orientation (SVO) test is widely used in social
psychology and other disciplines, such as economics.

One of the most striking findings was that there was a distinct difference in the neural processes involved in giving to others between prosocial and individualistic subjects. This difference existed even when the two groups chose similar things in the original task.

Nakahara considered it particularly intriguing that prosocial subjects used a similar brain process for other-bonus and self-bonus choices, mediated via the left dlPFC–mPFC pathway. Individualist subjects, on the other hand, mediated the process of weighing up giving to others in a different way to the self-reward choice. In the second stage of the process, more ‘selfish’ subjects mediated the choice to give to others by the right AI, which represents where the brain may digest the implications of the benefit-to-others option.

This isn’t all about selfishness and generosity, but rather perceptions of value, emphasize the researchers. Rather than being altruistic, a generous subject may be perceiving more value in social contributions or be subject to predispositions such as inequity aversion and guilt. The team have called the process of deciding to give to others ‘social value conversion’. In the paper, the team predicted that social value conversion is actually a primitive computation that may be essential for different forms of social behavior.

The team’s findings provide building blocks for investigating more complex forms of social decision-making. Exploring ideas about generosity and selfishness would call into question the role of cultural and religious factors, and variations across countries and regions, for example, in accounting for how we each perceive and take on board consideration for others.

These multifarious factors “would certainly contribute to shape more complex types of social behaviors,” Nakahara explains. “Through repeated experiences in daily life, they would be built-in as part of the neural circuitry of social behavior and decision-making. The building blocks of the social conversion process would then be modulated and integrated with those processes to produce a final behavior and decision.”

Another promising research direction, albeit one that goes beyond the scope of the present study, would be to look at the possibility that the process involved in giving to others might in some way be different in people with antisocial disorders. Such differences, if identified, may contribute to understanding of the neural correlates of antisocial behavior.

Nakahara’s team is continuing to work on uncovering further insights into of social decision-making. “One of our ongoing studies investigates how people seek to make better decisions by predicting the decisions of others, and we are getting some interesting results,” he says. 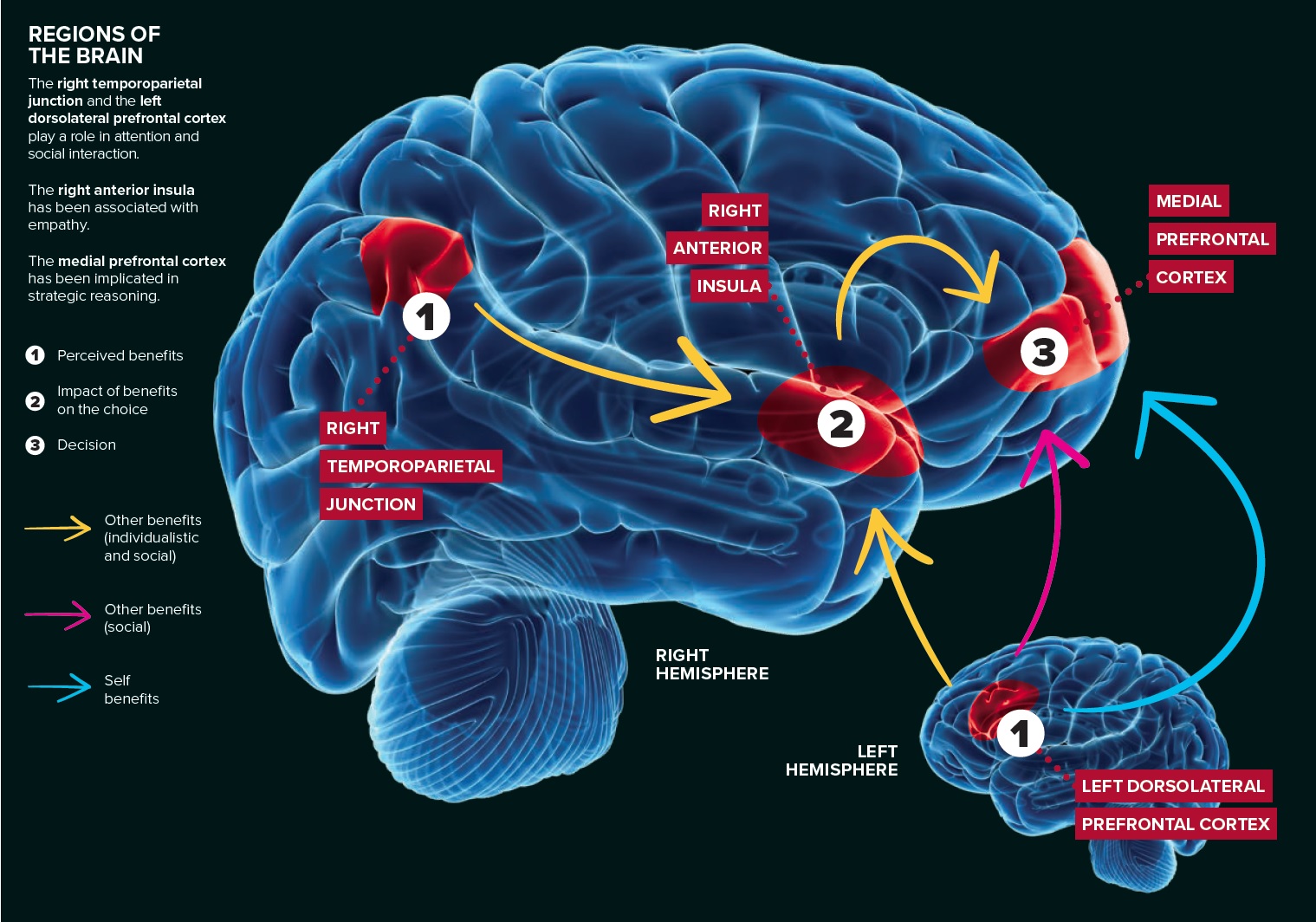 Regions of the brain: The right temporoparietal junction and the left dorsolateral prefrontal cortex play a role in attention and social interaction. The right anterior insula has been associated with empathy. The medial prefrontal cortex has been implicated in strategic reasoning. © SEBASTIAN KAULITZKI / SCIENCE PHOTO LIBRARY 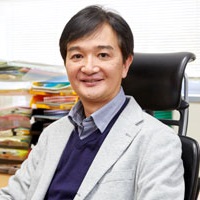 Hiroyuki Nakahara earned his PhD at the University of Tokyo studying sequential decision-making in biological systems. He then joined Shun-ichi Amari’s laboratory at the RIKEN Brain Science Institute (BSI), and later started his own lab at BSI. His Laboratory for Integrated Theoretical Neuroscience aims to understand the computational principles that underlie the way neural systems realize adaptive behavior, decision-making, and associated learning; in particular, reward-based learning and social decision-making. They build computational and mathematical models, while also using human functional magnetic resonance imaging (fMRI) in combination with quantitative approaches